Traces of the Past

I have mentioned before that I have very little of the story of my father's family, the Irish immigrants who settled in Boston and Charlestown. One day, noodling through an archive of old Boston photos, I found this (identified as Charles River Avenue). I see a blurry trace of a horse entering the picture on the left, so I know this is pre-1900.  I also see, in the glass above the doorway, a numeral beginning with a "one". This got me very excited because my great grandparents, Andrew and Catherine Fitzgerald lived in this very block for over ten years. I had to dig into old directories and old maps to figure this one out. First I went to the directories

This is the entry for the 1869 Boston City Directory. There is Andrew who at this time would be living with his wife and oldest son at 10 Charles River Avenue. Next came the 1880 Federal Census, just to make sure I had the right Andrew Fitzgerald.

In the left margin you can see where the census taker wrote Charles River Avenue. And there are Andrew, Catherine, Andrew Jr., Robert, Nora and John (my grandfather). Next I looked at the
1886 Directory.

This time it even identifies him as a teamster. The family has moved to 16 Charles River Avenue. I began to be curious about the buildings in the photo, but no amount of PhotoShop made the numbers readable. So I went back to antique maps. And finally I found this with the house numbers along the street. 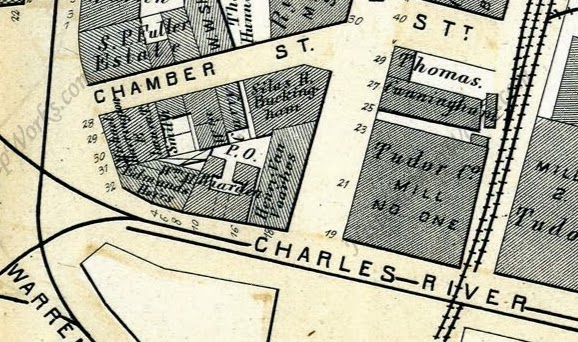 Numbers 10 and 16 are the two sides of the very large center clapboard building with all the shutters.
The docks and several mill buildings were immediately to the right and out of the picture. They lived right on the waterfront. So even if I don't know much about them personally, I have some small trace of their lives in the geography of Charlestown that has long since disappeared. It is a block that doesn't exist anymore. Once a thriving row of shops and apartments, there is a park and the ramp to a large bridge into Boston and a large hotel complex sitting there now where Route 1 meets Route 93.

Later, Andrew and Catherine moved to Stetson Court, another place long made invisible with parks and freeways and modern backyards replacing the crowded tenements. 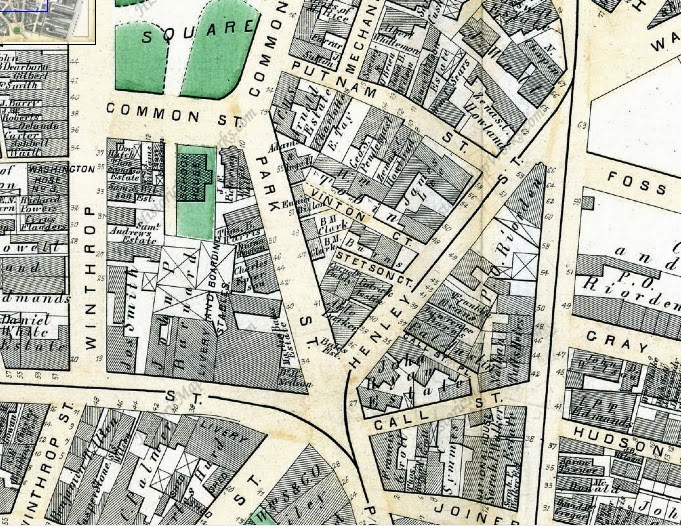 All the smaller streets on this old map are long gone from the area around Winthrop Square, but it's still just blocks from St. Mary's Church and a stone's throw from Monument Square where my father grew up. Small discoveries like this can be very satisfying when so little remains of the past.
at February 21, 2014 2 comments:


A visit to my grandmother's house was never complete until we went through the box of old photos. These  two photos were from an old album documenting my grandparents courtship. Many years later, my mom had two of them framed and presented them to me for the "family wall" in my house. The house in the background was the Tapply family home on Pearl Hill Road. My grandmother isn't quite a flapper, but still quite fashionable for the time. My grandfather looks like a bit of a scoundrel. (and it turns out he WAS- but more about that later) My grandmother always said that they met while performing in a musical revue. The account of their marriage makes reference to this 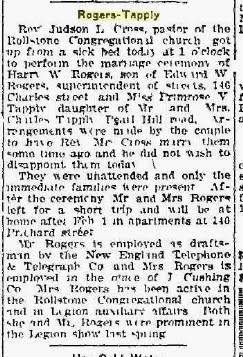