The Homestead- Three Brothers and a Little House

This is the Rogers family homestead in Holden. The house is on the National Register of Historic Places and dates to 1733. The account of the house provided by the Holden Historical Society lists many, many owners over the years and only a few of them were Rogers family members. Some the the town's prominent names are on the list of owners including Chaffin, Damon and Ware. However, members of the Rogers family were owners of the house for over 100 years. Thus, the name.

The description of the house calls it a Cape-type cottage of 11/2 stories dated from the early Georgian period.  It has a granite foundation, clapboard siding and rear lean-to which extends back to the barn. The grape arbor over the front door was part of the original design. The central chimney would have been the source of heating and cooking well into the nineteenth century. The double-hung eight-over-twelve paned windows are a really nice original feature. The basic structure of the house has been preserved over the years and apparently the inside was restored.

Originally the lot was 7.5 acres of upland and swampland and one of the original residents ran a blacksmith shop.  The building in the back with the red batten board is the location, which records show as original.  There were a number of businesses run out of the little shop; one of my Rogers ancestors was a cooper. That would be Benjamin Rogers, who lived here briefly between 1783 and 1810. Benjamin sold the house to his brother George Rogers (father of Winslow Brainard) in 1810. George soon moved on, but the Rogers family was not done with this house.

Aaron How Rogers, son of George, lived in the house with his family until 1841. It passed through yet another owner until Catherine Moore Rogers, widow of Moses, (sister-in law of Benjamin and George) bought the house. Her son Israel farmed here and her son Dexter is listed as a carpenter. Over the years more and more of the original land was sold off. Perhaps the little shop in back was put to new use. Catherine lived here until her death in 1877.

Catherine's daughter Maria Stockwell Rogers never married. The census records show her keeping house for her brother Israel and also for her mother. She was the next occupant of the little house. She died in 1907. The house passed at that time to her nephew, Samuel Walter Rogers, who was Israel's son. The census and directory records don't ever show S. Walter living with his family in the house. He was the associate managing editor of the Gardner News and seems to have lived in Gardner. Perhaps the house was rented to family members at this time. I can't find any Rogers family members in Holden on any official records, but by this time they had married into many of the Holden families.

This is the end of the line for the Rogers family in the little house. I have visited the property several times and never caught the owner at home, but over the years it seems more well-kept. Maybe some day I'll get a peek at the inside as well. 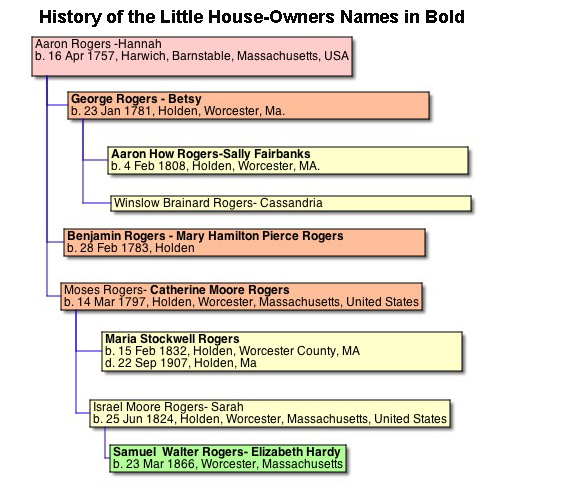