MORE SMITHS IN LITCHFIELD, MAINE
Following up on my last post.....
This excerpt from an 1850's map of Kennebec County shows the various landowners of Litchfield and Litchfield Corners. 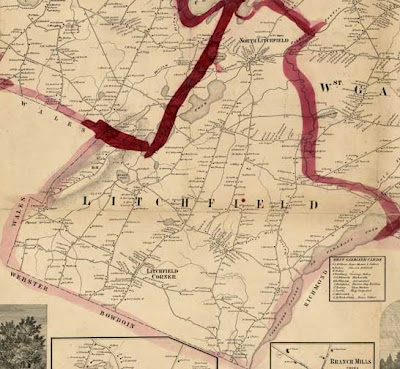 So this larger view gives you an overview of the county.
I found a lot of Smiths on this map, so I went back to my 1850's census and took a closer look. 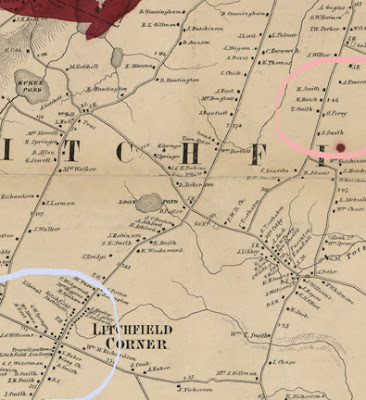 Sure enough I found Thomas Smith Junior,  Reuben Lowell's father, with his neighbors Mr. Emerson
and Mr. Hatch. That would be the area in the pinkish circle. Down in the lower left corner is Litchfield Corners where the other Smiths lived and ran a small store. That would be the light blue circle. With a little closer study, I'm sure I can identify a lot more family members.
Check here for some excellent map resources.
Posted by theailurophile at 12:29 PM 2 comments:

When the Lines Converge

The Smiths of Litchfield, Maine and the Rogers of Harwich, Massachusetts

It wasn't surprising to me to find that the lines of my tree crossed in a few places. I found lots
of overlap in the line that ran back to Cape Cod; the marriage options would have been limited
in the early days of the colonies and the families were large. No surprise there. What was a surprise was finding a crossing of the lines of my two great grandparents.

George F Smith came from a family from Litchfield, Maine. His line runs back directly to a James
Smith who settled early on Cape Cod. His great grandfather, Thomas Smith, was a farmer in Litchfield. Thomas married Mehitable Baker. Mehitable Baker's mother was born Mehitable Smith.
Her parents were Elizabeth Smith and Moses Rogers. That line of Smiths runs back to a Ralph Smith, also of Cape Cod. I've never seen a connection between James and Ralph, but it wouldn't surprise me.

I have two completely different lines of Smiths in Litchfield alone. Four of them have the same name. It was convenient when the records said "Thomas Smith husband of Hannah" or "son of...", but records were usually hand-written and seldom that precise. This is where writing out a timeline for the people in your tree might be helpful. Sometimes by dates alone you can tease out the threads of the truth. Sometimes you have to look for deeds, bills of sale, wills and other primary sources. Not all of this is online yet. I have some footwork ahead of me.

Now for a confession. I have never chosen a numbering system for my tree. The genealogy software I use numbers my offline tree using the Ahnentafel system, but my online tree would benefit by choosing a numbering system and using it. In fact, I find the whole numbering question fairly intimidating. There are some good resources online starting at Cyndi's List. If you are new to genealogy, do yourself a favor and number from the start. It may not keep the old records any straighter, but you'll know which Thomas Smith you're studying at a glance. Crossed lines are ok, a granny knot is NOT.
Posted by theailurophile at 12:30 PM 12 comments:

"Lotta, as tall and erect as her sister Cora, but already quite gray, looked out at the world through large, dark, anxious eyes. They (Lotta and Clara) seemed to live in a perpetual state of apprehension, nursing imagined slights and disappearing into their room or going off on walks to whisper..."

As a child, all I knew was that Lotta had had a promising musical career cut short and that she had to be institutionalized with some mental illness.  My mom's writing reveals the family story or perhaps my mother's version of it, "She had a magnificent singing voice...She was auditioning for the Metropolitan Opera. When Mama died, Lotta made a vow she'd never sing again - and she never has."

The truth is both sad and perhaps a little different. At the turn of the century she was singing with the Orpheus Quartet and shows up regularly in reviews in the Fitchburg Sentinel. By the 1920 census she was living with her sister and her mother in Worcester, Massachusetts and working as a clerk. By 1930 she was a hairdresser. What turned her from her singing career we'll never know, but by 1920 she was already 30 years old. Had signs of mental illness already begun?  She shows up one more time in the 1940 census living with Clara and doing hair, but by the time I was born in the fifties she was in an nursing home or institution.

Lotta's father George F Smith was from Litchfield, Maine. Her mother, Letitia Ellen Johnson, was from Spencer in Owen County, Indiana. It was researching her mother's line that gave me the first clue to Lotta's real story...or at least part of it. The 1860 census reveals this

Elizabeth would be Margaret Elizabeth, Lotta's grandmother. The note on the right gave me pause.
Letitia, Lotta's mother, was only 4 years old. Margaret was only 29. A quick email to a family member revealed that early onset Alzheimers ran in that side of the family.  At only 29 she seems pretty young for Alzheimers, but in those days they wouldn't have know what it was anyway.
The 1880 Census shows that by this time the family couldn't manage.

What a terrible choice her husband would have had to make! I did a little online research on the Indiana State Hospital and found it horrifying. Now I understood what probably happened to Aunt Lotta. Luckily, Lotta's care was more benign and her sister Clara was devoted to her for her entire life.

No one goes into genealogy looking for medical ailments, but this story gives information that might be useful to me or to family members.  It also filled out my picture of Aunt Lotta. It's nice to know a little more about the charming young girl in the photo.
Posted by theailurophile at 1:34 PM No comments: