Putting the Clues Together- Research with David J Webb 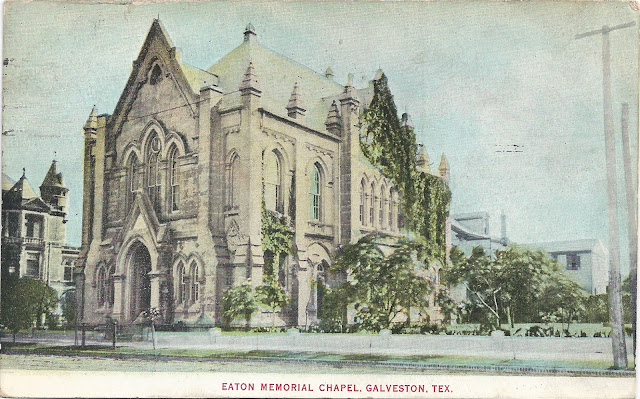 As I teased in my last post, David Webb does an amazing job documenting old postcards of the Houston area. I asked him to describe his process because I thought it would be instructive in genealogy as well.  (David did his own family’s genealogy for years) The way he came to this project is interesting. In 2000, he began taking photography classes at the local museum school. As his skills grew, he moved own to his own curriculum, inspired by the photography of Bernice Abbott. David says, “I was intrigued by the power of these images to make history come alive.” And, after all, isn’t that what we do as genealogists? He had seen an exhibit of 1930’s images taken by Abbott and contemporary images of the same places. It started a small fire in his imagination.

At the time this began, David was a regular visitor to Galveston where he became infatuated with the Eaton Chapel adjacent to Trinity Episcopal Church. These are some of the oldest buildings in Galveston, having even survived the 1900 storm. David began taking photographs.


He was already collecting old postcards of Bisbee, Arizona, the place where he was born. Now he began purchasing old Galveston postcards as well. It was then that the project that became Houston Time Portal began to form.

Here is the story of Eaton chapel in David’s own words.


“Among the treasures of Galveston was Eaton Chapel adjacent to Trinity Episcopal Church. The chapel was built in 1879 by Nicholas Clayton as an act of philanthropy by Henry Rosenberg to honor Reverend Benjamin Eaton, first rector of Texas’ oldest Episcopal parish [well described in Galveston Architecture Guidebook, by Ellen Beasley and Stephen Fox, Rice University Press, 1996…… For a small building, Eaton Capel  has a commanding presence… The first floor of the building is devoted to classrooms, and the second floor is a lofty auditorium.
Eventually, I obtained several other postcards of Eaton Chapel, ones that  had been mailed and teased at a hidden history that begged to be riddled out. The most intriguing one was written by “K E K” to Miss Henrietta Morgan, Taylor, TX on 22 February 1908. The author revealed a lot of personality in his message, which he scrawled across the face of the card in blatant disregard for the image. Certain details promised a portal into the history of the man even though he used only his initials. “
Invariably this is how David proceeds. He will find the history of the building first, combing through old guidebooks and city histories. But being a genealogist at heart, he is equally intrigued by the messages on the cards. Who were these people? What connection did they have to this place? 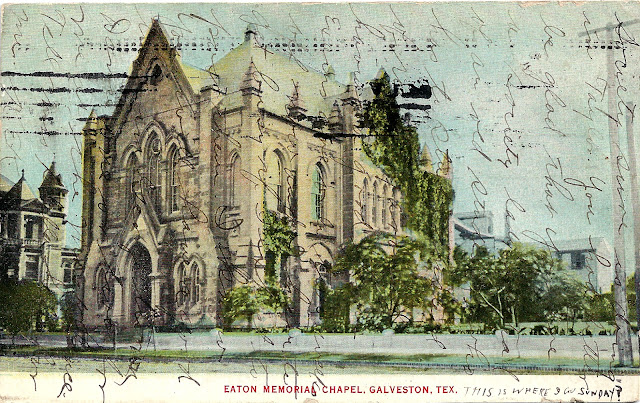 David continues by giving us the message on the card,


“Society sure is doing in Taylor. You had better be glad that you are a society lady instead of a student who has to study Instead of running around having a good time. Exams are only two weeks off now and I have to get busy if I expect to pass them I know you will have a good time in Georgetown Danse one or two for me at the Mask Dance Tell Miss Stella hello for me. K. E. K. This is where I go Sunday? Mrs. Patric Campbell is billed to show here during exams isnt that a shame I think I will go see her in spite of the fact. Might never have the chance to see her again.”

So he looks carefully at the card for the clues to both the writer and the receiver….
And comes to a few conclusions about KEK. David says,
“Most importantly, he mentions that “Exams are only two weeks off,” and since he posted the card from Galveston, it seemed likely that he was a student. He seems a bit flirty with his correspondent, Miss Henrietta calling her a “society lady,” and contrasting himself as “a student who has to study.” He urges Henrietta to “Tell Miss Stella hello for me,” and speaks of “Georgetown Danse,” all of which suggests he is a college student, and not a secondary school pupil.”

Now David has a dilemma. As a college student, how can he find this KEK? David’s solution is to turn to a city directory.
“As a student, he would be more transient than a resident might be, so a search within a narrow time range is essential. Galveston published a city directory for 1908, so an examination of the alphabetical K-section might turn up a student at the Galveston Medical School.  There are 11 pages of entries with about 80 persons per page, so only 880 possibilities to examine. K E K is probably male, nonetheless, females should also be noted:
Kelly, Kate, Miss h 1414 Postoffice
Killeen, Kate J. Miss r 2002 L.
Kovocavich, Kirto, lab Mrs 3827 B’dway
Krivokopich, Krist, r 1909 Mechanic 4.
Krug, Kenny E. pharmacy student Mrs 828 Market 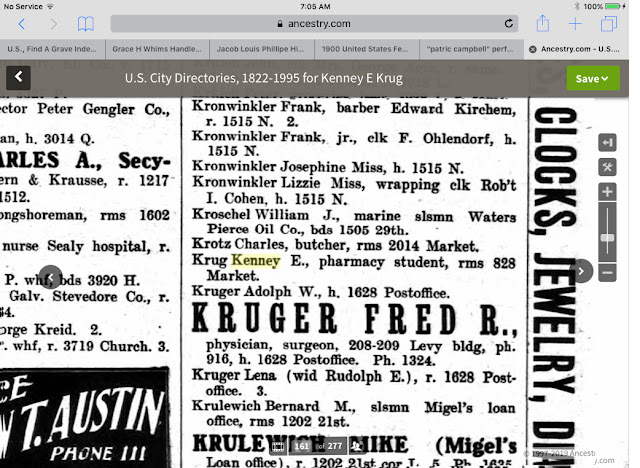 The last seemed such a likely candidate that I looked no further, and focused on Kenny. The name was quite adequate now for a census search, but that might be only circumstantial, even if compelling.”
I might mention, at this point, that David has a research science background. He’s all about evidence and conclusive proof. So the next thing he looked for, given the time period, was a World War I draft card. There would be a signature. Can you see where this is going?

The strongest confirmation of his identity would be a comparison of his signature, and since K E K left a good record of his handwriting, another document with his signature might be definitive. He wrote another card to Henrietta on April 20, 1908, this one of Trinity Episcopal Church, similarly scrawled across the front, which I purchased in the same lot as the same as the first, and this he also signed, K E K.
When WWI started for Americans in 1917, all males of a certain age were required to register, and that document bears their signature. Although the cards were written nine years earlier, the signature should be fairly stable. “Kenneth Edwin Krug” of Brenham is described as medium height and weight with blue eyes and brown hair. His date of birth is 2 December 1887 and is 29 years old on June 6, 1917 in Brenham, Washington County, TX. He is a druggist with a wife and child, “crippled” from meningitis. The signature is a very good match, so with this handwriting comparison in addition to the biographical details, it is not likely that K E is a different person.” 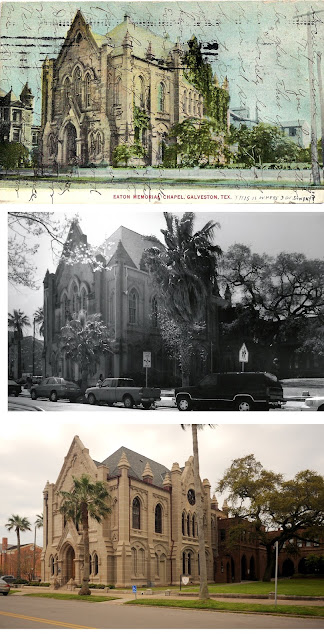 The 14 years between the two rephotograph shows considerable growth of the palm trees, but no alterations of the chapel itself. “

So you can see what I mean about David’s amazing process. Simple genealogy for most of us, but he weaves a compelling narrative. David has meticulously purchased old postcards, many of Houston, gone to the spot where the building once stood(or may still stand), and rephotographed standing as nearly on the same spot as he can manage. Each pair has this same level of research.

You can find the Eaton Chapel pair here.
The main website is located here.

For those of you Houston history fans or anyone who just loves history, this is a true rabbithole. Enjoy!
So now comes the challenge to all of you. What kind of narration can you weave using the documents you have collected?  It’s “history come to life” that draws in the next generation of family genealogists. Get busy!
at June 19, 2019 No comments: