I expected to find my Smith relatives first as the place was once "Smith Plantation", but to my surprise I found a Richardson ancestor. Abijah Richardson started out as the town constable, but rose rapidly in the town to become the moderator of the town meetings and town treasurer. Here is a sample of the minutes from 1797. Of course Maine was still part of the state of Massachusetts at that point. You will see Abijah's name, but I think you'll also recognize the name of the candidate for governor. 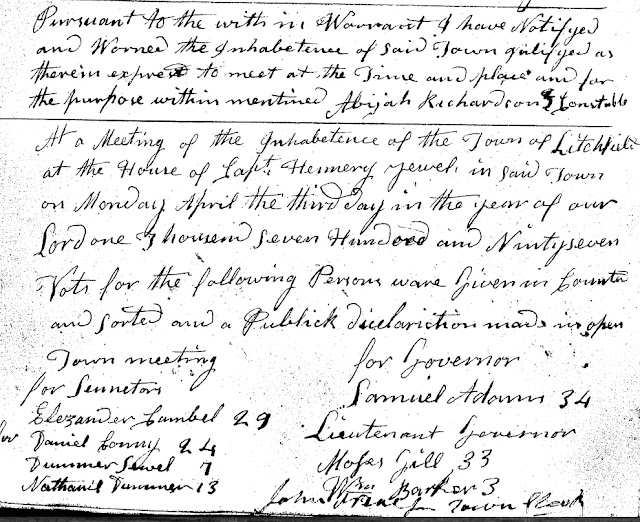 I kept trolling the records because the custom in those days was to incidentally record town minutes and birth, marriage and death records all together. Pretty soon all the Smith relatives showed up as well in a variety of town offices including a number of years as selectmen. It was the names of some of the town jobs that got me looking further.
Ok, so the surveyors of highways and collector of highway taxes is pretty straightforward. My ancestor Elkanah Baker was elected to that post among others. After that, I had to look around on the internet for some information.

Tything men collected alms for the church, but they also had a variety of other duties as described in the New Hampshire History Blog:
"It was the tithing man's duty to detain and arrest Sabbath travelers, unless they were going to or from church or to visit the sick or do charitable deeds. His job was also to keep the boys from playing in the meeting-house, and to wake up any who might fall asleep during meeting."
They carried something called a church stick with a large knob on one end and feathers on the other. Sleepers would either get a sharp rap with the knob or a tickle, depending on gender.
Surveyors of Lumber made sure that the townspeople were getting their money's worth at the sawmill. They had to be experts in the measurement of lumber and assure that it was good grade.
Fence Viewers inspected new fences and settled disputes over older ones. They also settled disputes where livestock had escaped their enclosure. Since so many of the boundary fences in New England are hand-made fieldstone walls, this was a very important job. Many of those walls stand to this day. Robert Frost was right.
Culler of Staves inspected lumber which was often used for payment of taxes in lieu of cash.
"Great quantities of staves were taken by the town in payment of taxes assessed upon the inhabitants; and these must all pass through the hands of the culler. Persons might, of course, at any time make staves from timber taken from their own land; but timber for this purpose might also be taken from the common, under certain regulations."
Hog Reeves In the very rural South, it was not uncommon to turn loose hogs to forage in the woods and be recollected in the fall. Not so in New England.
"Owners of hogs were responsible for yoking and placing rings in their noses, and if they got loose and became a nuisance in the community, one or more of the men assigned as hog reeve would be responsible for performing the necessary chore for the owner; who could be legally charged a small fee for the service. There were punishments and fines established for not having hogs yoked and failing to control animals."
Field Drivers This was another job involving roaming livestock. A quotation from Massachusetts law describes it best.
"Every field drive shall take up horse, mules, neat cattle, sheep, goats or swine going at large in the public ways, or on common or unimproved land within his town and not under the care of a keeper; and any other inhabitants of the town may take up such cattle or beasts going at large on Sunday, and for taking up such beasts on said day the field driver or such other inhabitants of the town may in tort recover for each beast the same fees which the field driver is entitled to receive for taking up like beasts."
On the page above I can see several of my Smith relatives filling these jobs.
There was also a full page of descriptions of ear notching to identify livestock. It got very creative, but I'll save that for another post.
Oh, and I forgot to mention that this blog passed the three year mark on June 2. Happy Blogiversary
to me!
at June 06, 2016 3 comments: