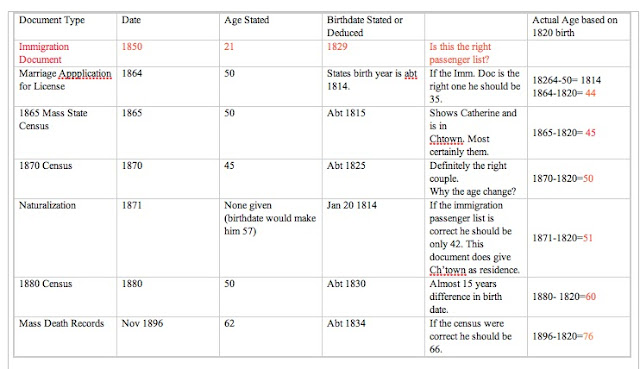 You may remember in a previous post about my great-grandfather Andrew Fitzgerald, I puzzled over this chart. I made this to puzzle out why the ages seemed so diverse and inconsistent. My cousin Jon pointed out, and rightly so, that Andrew may not have been literate and may well not have know his age. The real outlier was the immigration passenger list. I decided that if I threw THAT out, I might make some real progress. So I have added a column on the right based on some new information I just found. (I still think he was deliberately shaving his age in some cases) And remembering that birthdays were NOT a big to-do over a hundred years ago, I think I may have been able to add some family in Ireland to the tree.
I was looking at the marriage application document from the last post. 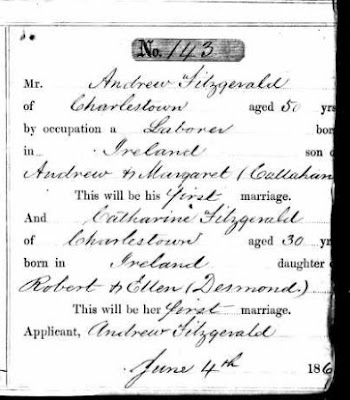 The names of HIS parents and hers are real leads in the Irish records. I looked at the Charlestown marriage record and the same two names appear again: Andrew Fitzgerald and Margaret Callahan. So based on that I was off and running. Ancestry posted a link to some updated records they just added from the Irish National Library. This is baptims and marriages in Roman Catholic parishes. And plugging in the three names.......... 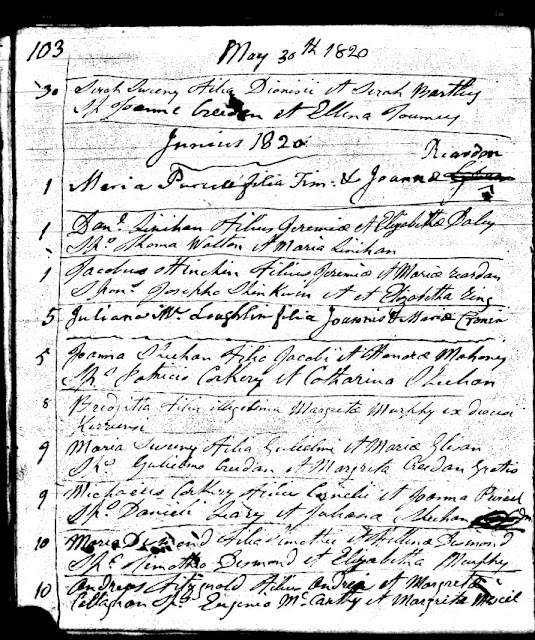 Here it is in Latin at the very bottom of the page "Andreas Fitzgerald filius Andrea et Margarit
Callahan sp. Eugenia McCarthy et Margrite  ?." (not sure of that last name) So could this be true? 1820?
I decided to go to the records and start combing. How common was the name in Cork? How common would a combination of both names be? I went page by page and found siblings. And every time the parent names were consistent. And 1820 would not be so very far off from 1814. Before long I had a tree that looked like this: 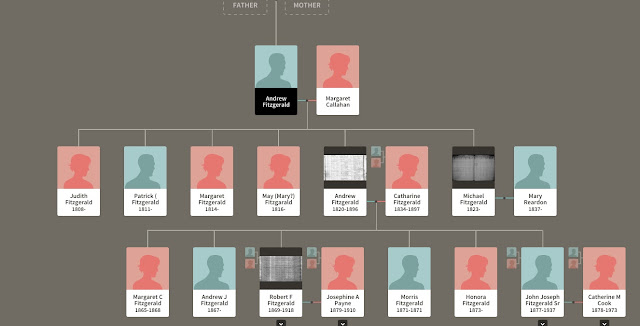 What I see in the records seems to fit what I know. I can't be absolutely certain, but I think this is it!  Where I had a spindly little chopped off tree, I now have some ancestors.
I was curious about the locale. The front of the register said Diocese of Cloyne, parish of Macroom. There again, I ran into all the Irish geopolitical divisions. So I went directly to the Library of Ireland page and there was a handy dandy map next to the image from the records I had been using. 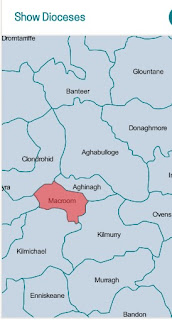 I checked out the information on the parish and it turns out that the church name also matches the name I found in the front of the birth register: St. Colman's. Macroom, according to Wikipedia, is a market town fourteen miles west of Cork. It was a bustling town until the great potato famine when, according to this source, it was "decimated by death and emigration". Now by the time Andrew decided to emigrate in 1850, the famine was past, but perhaps he saw no future for himself in this place. Or perhaps he was still young enough to dream of adventure.  I still wonder if Catharine, his wife,  was some cousin, however distant. She emigrated at about the same time. I think I'll have to give the passenger lists another close look. Those birth records were full of Fitzgeralds. Only one other Andrew. Too far off in date to be mine and different parent names. But I also saw some Desmonds. And that was Catharine's mother's name.   The next task was to go into my favorite Google street view and see what this place looks like. This is the site of the various baptisms: St. Colman's Roman Catholic church. It has quite an extensive bit of land. Perhaps a school or convent as well as the church. 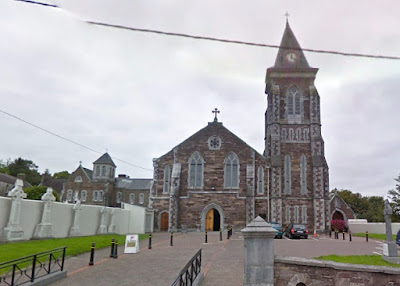 And, of course, I had to get a good look at the town. I plunked the little man in Streetview in various spots. It seems to be a quiet little Irish town. 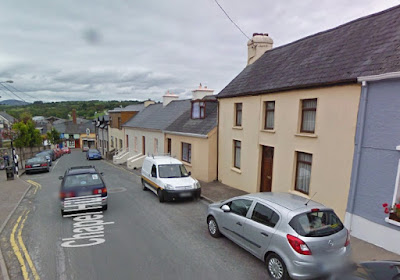 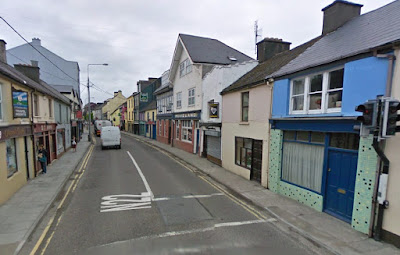 Just in time for St. Patrick's Day, I've made some real progress on the Fitzgerald side of my tree!
Hope you have the luck of the Irish in your search for ancestors.
Posted by theailurophile at 4:08 PM No comments: