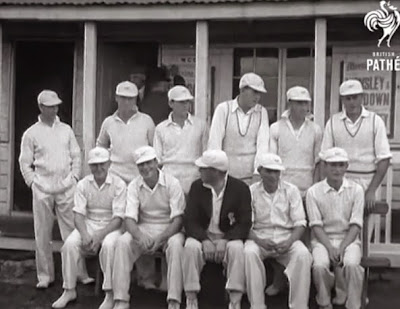 YouTube has just added another wonderful resource for family historians. The entire British Pathé
film archive now has its own channel here. I did a quick search for the little village where the Tapply relatives came from and came up with this newsreel footage from 1935 for a cricket match involving the Wittersham team. Nothing came up on a name search, but if you had someone notable in your British family something just might. And further searches for Maidstone and Isle of Oxney came up with other interesting footage. If you have British relatives in your tree, this is worth a look.
Posted by theailurophile at 8:20 AM No comments:

Family myths and family stories are a funny thing. They tend to take on a life of their own. My mother wrote a letter to England during the Blitz of WWII because her grandfather's brother George Tapply
was living in Kent, in the path of the bombers. He wrote back from a little village called Whitstable,
which is right on the coast on the Thames estuary. Apparently it's known for oyster farming. Ever
after that my mother reported to various family members that the Tapplys came from Whitstable. Or
at least by the time she was grown and people became curious that was the family story. When I began
looking into the Tapply family I had this reported to me as absolute fact by various members of the Tapply family. Courtesy of mom as I soon discovered.....

I began by looking for census records for Charles and Ellen somewhere in Kent. When I found them and their various family members a family myth fell to pieces. As it turned out, the family of Charles'
generation and his father James Henry lived in the tiny village of Wittersham near Tenterden. I found them there on multiple census records along with James Henry and various brothers and sisters. Later, when the family was almost grown, they moved to the small city of Maidstone. This is where the story of Charles and Ellen really begins, just before their emmigration to America.

The picture above shows Ellen and Charles on what I am told was a yearly trip to stay at the beach. I love the "driving" duster on Ellen and the bathing costume hanging behind them. To compound the  family story, my mother reported that the Tapply clan made this yearly trip to the area around Hampton Beach and Rye Beach, New Hampshire. When mom finally made it to England and to Whitstable she reported that she now understood why they liked Hampton Beach. Whitstable looked like Hampton Beach and it must have "reminded them of home". Perhaps it did. In it's way... The truth is that Charles' brother George worked for the British postal service for many years and when he retired he lived in Whitstable. For George, this little seaside town was a slice of "home". His job for the postal service had been in Brighton- another somewhat larger and more touristy beach spot. I'm sure he found Whitstable restful.

All of this reminds me to keep in mind the first advice for every amateur genealogist. Use the family stories as clues, but don't become wedded to them as fact. I still like the story of the whole Tapply clan decamping from Fitchburg for a vacation at the shore. I like to think at least that part is true....
Posted by theailurophile at 6:57 AM 3 comments: