Reading up a little this morning, I discovered that Memorial Day was originally Decoration Day and was established especially to remember those lost in the American Civil War. This Memorial Day I would like to remember the man who piqued my curiousity  about my family. Winslow Brainard Rogers enlisted in the Union Army in 1862. He was a bugler in Company G of the 36th Massachusetts regiment. He died of smallpox after the siege of Vicksburg on July 25, 1863. He was only 38 years old when he died. There is a marker in his name at the town cemetery in Holden, Massachusetts and his name is engraved on a plaque in the town hall. As a child we had a packet of letters written from WB to his wife Cassandria. I no longer have the letters available to me, but I remember how sad they were and how terribly he missed his family and his small hometown. For those who made the ultimate sacrifice, on this day we remember.
at May 24, 2014 No comments:

This is both a sad and a happy story. It is the story of family lost and family found. When I began researching my Tapply relatives, I knew there were a few "skeletons" in the family closet. I had heard the stories of divorces, misbehavior and one in particular about a baby born out of wedlock and adopted by another family member. When I filled in the original family tree, I plugged in what I knew and hoped I'd find more.

Before 1920, my grandmother's sister Bess Tapply and her husband Samuel Walley were living in Rutland, Vermont where he worked for A T & T. I found a very sad record of a stillborn child early in my research and I knew that her only other child was adopted, so Bess was unable to have children of her own. Bess was one of the loveliest and most loving people I have known.  I could only imagine how long she and Sam tried for children. It made me very happy to find this in the 1920 census:

There is the child they adopted living with the Walleys at 1 1/2 years old. In a later census she is recorded as Eunice Haskins Walley. The story as I heard it was that Bess's brother Harry has gotten a girl "in the family way" and that Bess and Sam had adopted the baby. They always called her June. So I recorded Harry as the father with mother "unknown" and Bess and Sam as the adopted parents.

Clearly there was some trace of her beginnings in the census. Could the mother's name have been Haskins? I looked in Ancestry and FamilySearch and didn't turn up anything. In the meantime, I was also turning up Tapply cousins who were interested in genealogy. One was Holly Jones, Harry Tapply's granddaughter. Did she know the family story? I hoped so. But one day she emailed me and asked "Who is this June?" This is one of the moments in genealogy you don't look forward to. I told her the story I knew and referred her to the family reunion photo. In the close-up above you see June in the second row, second from the left next to her half-sister. Did they know? Probably not. Holly had never heard this story from her mother Beryl or her aunts Fern and Janice.

Holly felt sure there was more to this story-the 1920 census showed Harry living with his parents and listed as a widower. I began to suspect so as well. I think it was BillionGraves that turned up the record that made us sure. Gertrude L. Tapply showed up in a search, buried in Westminster, Massachusetts in the Haskins family plot. 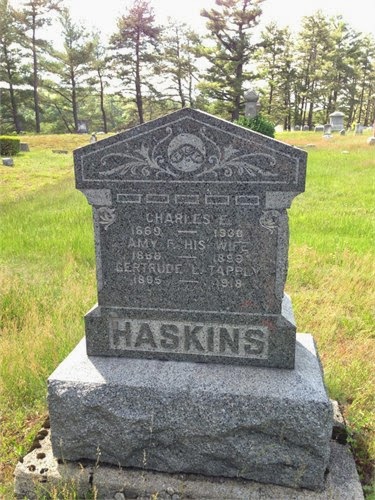 Unlikely that she'd be buried as a Tapply if they hadn't married. Next we found the death record: 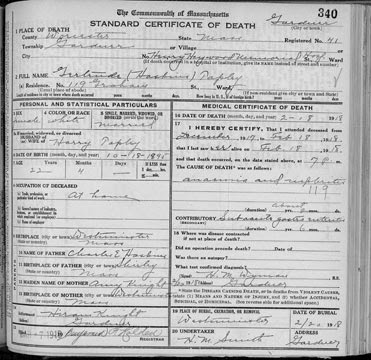 So we know she died in February of 1918, that she was married at the time, and that June was born in late 1917 or very early 1918. The cause of death doesn't seem like a death in childbirth.
Finally we located the marriage record:

So clearly Gertrude was pregnant when they married and Harry was in the Army fighting in WW I. Was he even around when the baby was born? When his wife died? Perhaps not. Even so, he'd be hard-pressed to care for an infant by himself and there was his sister longing for a child. So June lost her mother and her father early in her life and became the very loved child of Bess and Sam Walley. Bess and Sam had a large house in Newburyport, Massachusetts and went on to raise June's son, Ted as well. Family lost, family found. And another family myth dispelled!
at May 12, 2014 10 comments: