This is the dress uniform of the Royal Engineers for a sapper. A sapper was responsible for building and repairing roads and laying and clearing mines. This was the future that stretched ahead for Charles Tapply in 1880 as he served with his unit at Chatham.  I found this information on the Royal Engineers: "The Royal Engineers were the corps most affected by technological advance. In addition to their traditional duties of fortification, road- and bridge-building, they also became responsible for the operation of field telegraphs, the construction and operation of railways, and even the provision of balloons that provided observers with a "bird's-eye" view of enemy positions."
The First Boer War was in progress and Charles was as likely as not to end up in South Africa. He was 23 years old. He had a wife and a child and a baby on the way. Had he volunteered or was he conscripted? Who knows? Facing the prospect of several years of hard service, he "did a bunk".

How do I know all this? Well, I was lucky enough to win a photo-captioning contest on the Ancestry FB page and won access to The Fold and Newspapers.com.  Most of the records are "premium" and there's arm-twisting to pay for a better membership, but I did manage to grab a couple of things.

First is the notice of deserters that appeared in the Police Gazette. 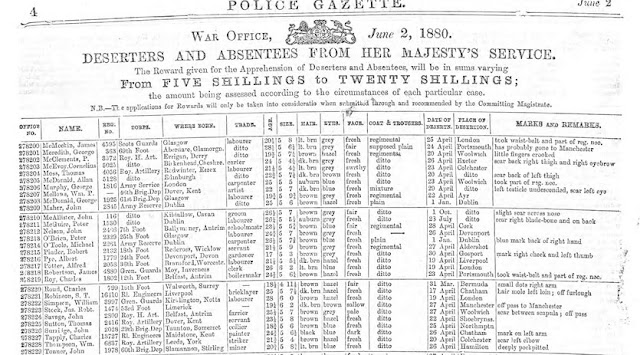 The listing here gives us a lot of useful information. He was serving with the Royal Engineers. We know this is our Charles because it names his hometown as Maidstone and his occupation as painter. It gives a physical description of black hair, blue eyes and dark complexion with a mark on the left arm. And it states that he had disappeared from Chatham. Chatham is in the far eastern part of Kent.
The next document is the record of his court-martial. I don't see a year at the top of the page, but I'm assuming that after the notice in the gazette with no result, they proceeded with a court martial in January of 1881.

We also know that since Daisy was born in February of 1881, Charles stuck around through June or July of 1880.  The census in Maidstone 1881 shows Ellen and the two girls living with Charles' parents. From what I can find out, the census back then was taken in April, May or June.
My guess is the Charles hid out in the area until he could find passage to the U.S., but we don't know when or how he actually left.

Here again is the passenger list with "Mrs. Tapply", Annie and Daisy. No Charles.

And here is the "header page" for the passenger list, which tells us they arrived June 17, 1881 in New York from London. As I talked about in a previous post, it would have been Castle Island. No trace of Charles under an alias, so he came by other means. 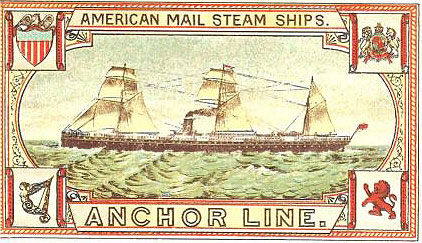 Here's a rather charming stamp representation of the steamship Bolivia. I doubt traveling alone in steerage with an infant and a three-year-old was charming.

What do we know now? Well the "Grandpa deserted from the British Army" story is definite. The records are all there. If he really was on the run, then the chances of finding his name on any passenger list are slim.  I was bowled over to find his name on those two lists for the British Army even though that service was considerably less than distinguished. At this distance in time and place, it simply adds a little "spice" to his story.
Posted by theailurophile at 2:35 PM 2 comments: