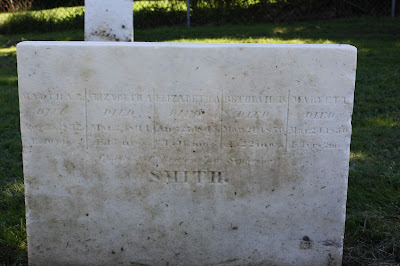 Sometimes you find a very sad story in your family tree. The story of the children of Reuben Lowell Smith and his wife Sophronia Richardson Smith is one of those. I did a number of searches with
________Smith and the two parents as the parameters. Every time I searched, more children popped up. And this image appeared on FindaGrave. These are the five daughters of Reuben and Sophronia who were born and died between 1841 and 1850. Sandwiched in between was my great grandfather, George Frederick Smith, who luckily survived. There's no indication of how each of them died, but at least two died of croup and they all seemed to have lived about a year. This is a sad reminder of how fragile live was even then. The story doesn't stop there..... 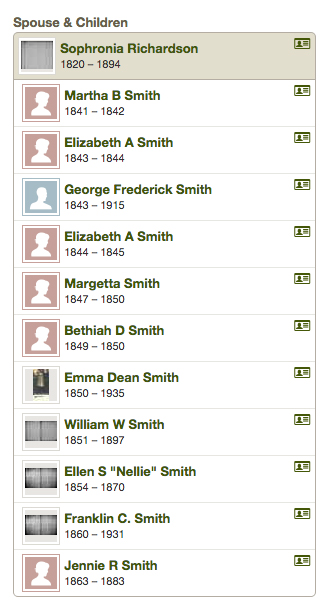 Reuben and Sophronia moved to Massachusetts and continued to have children.  Both Ellen and Jennie died in their late teens/early 20's. Jennie died of consumption not long after her 18th birthday. I also found a record which may indicate yet another child. So of 11 children we know about, only 4 made it to adulthood. There was a lot of sorrow in that house.

This must have touched someone else in the family as well. The stone in the picture above has a placement date long after the deaths. Someone remembered these little girls...
at June 24, 2015 2 comments: