The Small Bonuses of Family Genealogy

I receive messages here on the blog from time to time, but more often there are messages over at my Ancestry account. Sometimes, it's a cousin looking for family details, sometimes it's a total stranger. I got a message last week from someone I didn't recognize, and after some cautious back-and-forth I discovered a website and a mission I'd never heard of before.

Chris Hodge of Heirloom Archaeology likes to haunt junk stores and antique shops. Often, he discovers old family photo albums or other ephemera. He's made it his mission to return these, when possible, to the family members who might treasure them. That's where his email to me came in. He had found a photo album with roots in Lewiston, Maine. There are names in the list I recognize: Lowell, Newell, and Cummings all sounded familiar. It was the Lowell connection in my tree that Chris spotted. Sadly, these folks are pretty far off in the tree, so probably not the best home for the photos. Little Blanche Lowell is my 4th cousin 3 times removed. But Chris was gracious enough to share the images with me, so we all get to enjoy Blanche and her doggie friend.
For the cousins, this is how we are related: 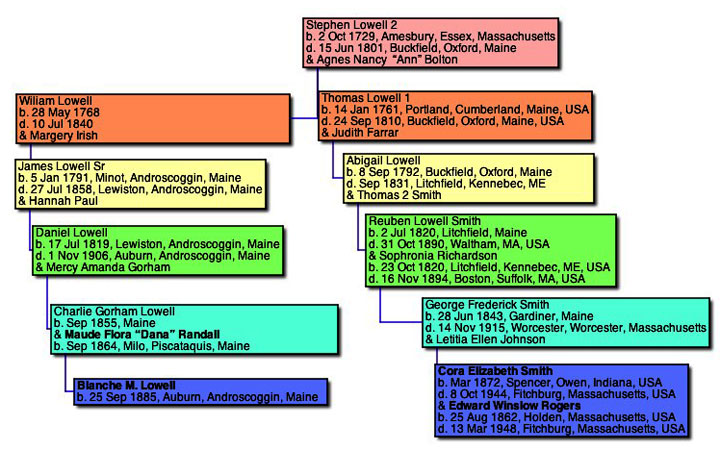 Four steps down the tree and I'm 3 steps removed from Cora. That's how it works. I checked out Charlie Gorham Lowell and found that they lived around Auburn, Maine until the turn of the century. He was a farmer who married Maude Flora Randall. It appears that Maude didn't survive long, but their daughter Blanche did. Here's the picture Chris sent of Maude: 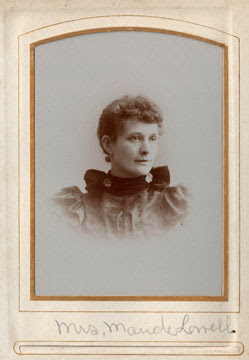 I can't find any trace of Maude after about 1885 when Blanche was born. Charlie and Blanche lived on Long Island, NY for a while and then in Manhattan where, as an adult, she was a house servant. The census lists her as divorced. Other trees have Charlie remarried later and back in Maine. I haven't been able to verify that. Chris also sent three other very cute pictures of Blanche which I enjoyed seeing. 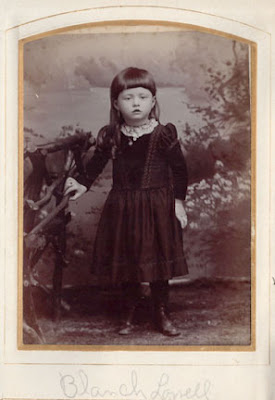 All these photos seem to have been made at the same photographer's studio in Lewiston. So, it would appear they DID return to Maine periodically. 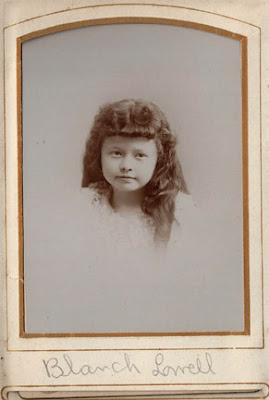 She was certainly a cute and well-dressed young lady. I did determine that the photos Chris has are probably from somewhere in the immediate Lowell family. He lists Grace Lowell Young, who I found was Blanche's first cousin. One of the uncles or great uncles had a bunch of daughters, so I suspect the album came from a first or second cousin right in the area.

If any of the names I've mentioned or the photos here seem familiar, follow the link I provided and contact Chris Hodge. He'd love to restore them to a family member. And what do I plan to do with the scans? Well, they'll go into my archive and on the tree, of course. But I have another plan in mind. My friend Stephanie Rubiano makes shadow boxes with old photos- she's especially clever with photos of Victorian children and their pets. Blanche's photo may or may not find a forever home, but as a piece of original artwork she can live on my wall. She'll remind me of the small bonuses of doing family genealogy.
at December 01, 2016 5 comments: