Tubbercurry or Tobercurry - the Cooke and Feely clans 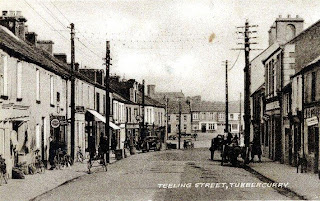 Working on the Irish side of my tree was something I'd always hoped I could do while my dad was still alive. Sadly that was not to be. He wasn't able to be very helpful with information about his family-from what he said they could be close-mouthed and secretive. As a young boy in a working-class household where the adults had other worries,  I'm sure he was more interested in swimming at the Boy's Club and playing kick-the-can. I pried as much as I could get from him while he was alive and he surprised me by showing a bit of curiousity about my searches for his extended family.

I found some American census records and a few death records. Focusing on Boston, there were a few more hints. Dad said there were some Feely cousins he remembered from his childhood. He thought the Feelys had a car dealership in Roslindale. So far, that search hasn't yielded much.  I also found a Maurice Feely living with the family on an early census. If anyone out there thinks this rings a bell, I'd love to hear from you.

Experienced genealogists tell you to "go with what you know" and re-examine every document. Now it was time to try to "jump the pond". So I went back to my grandmother's Irish birth certificate. Sure enough, right across the top was the first piece of the puzzle.

Someone, maybe my dad, had mentioned Roscommon in connection with the family. Clearly I was looking in the wrong county. So now I had county of Sligo, Aclare district, town of Tobercurry. Exceeepppt..well look at the photo and then look at the certificate..yup..is it Tobercurry or Tubbercurry? Apparently, even the Irish don't agree as a Google search will tell you. And the Irish changed and simplified a lot of names at one point.  But I had a place to start.

Irish records are challenging. Many weren't kept, some were burned and some have been destroyed by time. The Catholic church has some parish records and in those the names are often in Latin. Yet another challenge. Luckily both Ancestry and FamilySearch had this record: 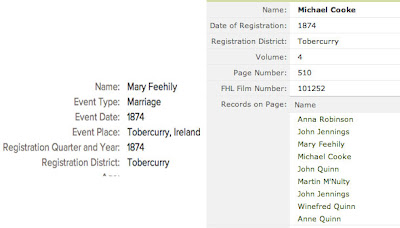 Comparing the two, you can see my great grandmother Mary Feehily (Americanized to Feely) and Michael Cooke (Cook) marrying in Tobercurry just before the birth of their oldest child. At some point soon I will go off the the local Family History Center and order this record. Hopefully, it will have a little more information to help me along the way. Further searches in the Irish records have shown me that there are and were a LOT of Cooks, Cookes, Feehilys and Feelys in and around Tobercurry. I'll need a few more clues.
at June 14, 2013 6 comments: