Here is my great grandmother, Ellen Benn Tapply with my grandmother Primrose Tapply on her lap. From the age of my grandmother  in this picture I would guess this was taken about 1900 in Newton, Massachusetts.

When documenting a birth in genealogy records, we are told to get as close to the primary source as possible. So here is what I found for my grandmother. First we have the family Bible: 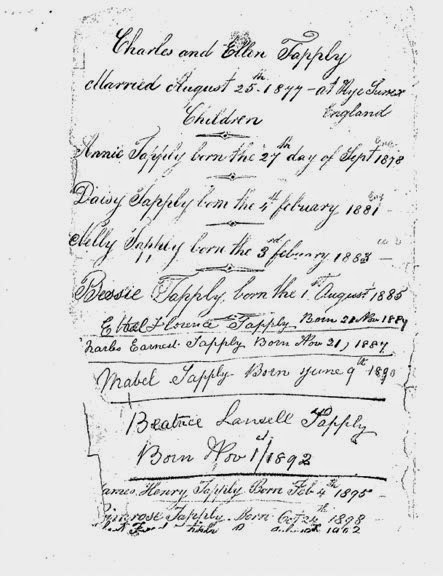 This is generally a somewhat reliable source, but this depends on who did the recording. I notice that the first four entries are all in the same hand. The later ones are not. Plus in another spot in the Bible it says the Bible was "given to her by her mother". I don't know anyone who refers to themselves in the third person. So my guess is that Ellen made those first entries and the later ones were made by one of her daughters. At the bottom you can see the entry for my grandmother : October 24, 1898.

Next I found the register page for the city of Newton where my grandmother was born:

There at the very bottom, entry 679 was recorded in the register on January 16 of 1899. For a long time, I thought that was it. I'd found my primary source. Then Ancestry made a whole new set of Massachusetts birth records available. You see, what I'd completely forgotten was that my grandmother would have been a home birth. All of Ellen's children were. Attended by a doctor perhaps...or not. That was how it was done back then. And in that new set of records I found this: 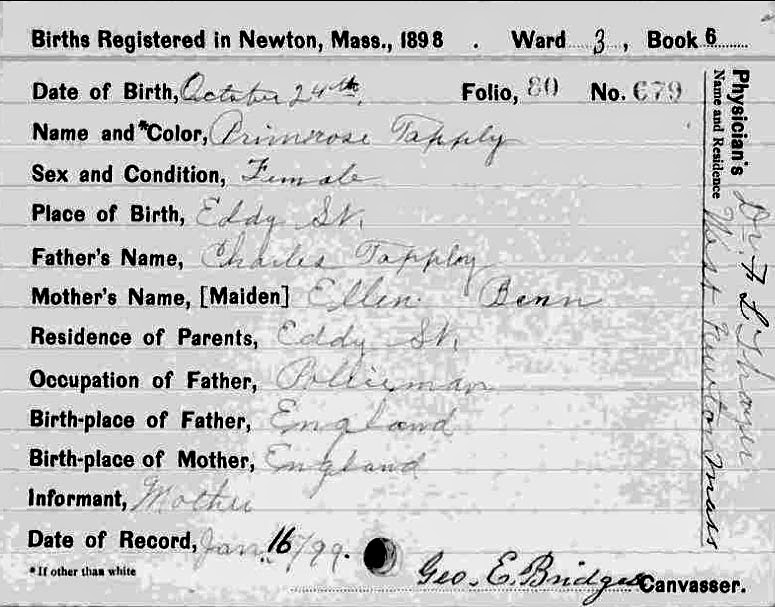 Now I know by the date at the bottom that this is the source of the information for the register entry. I also see a physician's name on the right side and the place of birth is Eddy Street. So this was the official physician's record of the birth for the city. I don't know if he made notes and transcribed them later, or just filed a card based on information supplied by the parents when he made a home visit, but I would guess this is about as primary as a source could be.
Always keep looking. Never give up.

Posted by theailurophile at 2:15 PM No comments:

Foolishness- How Reliable is That Source? 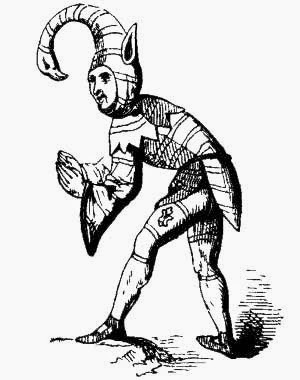 On this April Fools Day, I can't help but think of how wide-eyed and trusting I was when I began this genealogical adventure.  I must confess that although I had had some curiosity for years about the family, it was watching "Who Do You Think You Are?" that inspired me to actually begin this hobby.

I signed up for Ancestry, I began contacting family members and before I knew it I had more information than I could deal with. Totally. Now I did know enough to look closely at the hints on Ancestry that I was getting.  Once I got the tree back far enough for the information to be more obscure I realized why we are cautioned to be so careful. People on Ancestry who have public trees copy and paste and borrow willy-nilly. And mistakes get copied from tree to tree and become someone's version of "fact".  I soon became very wary. (and BTW I consider my online Ancestry tree as more of a "worksheet"- I try to only put things on my computer-based genealogy program that have some documents to back them up)

So let's look at a fairly glaring example of this. My ancestor Joseph Rogers arrived with his father Thomas on the Mayflower. That much we know. We know he lived on the Massachusetts Cape, married, had children and died there. There are records in Barnstable County of his death. His birth, however, is less certain. We know it was probably in England. Here is what I find when I follow the hints on Ancestry.

So first we have this. Right away I'm suspicious because it is from the Family Data Collection. That could be an actual Bible or it could be "family stories" or it could be a written history passed down or it could be "Old Aunt Fanny always said". No knock on family records, I just have learned to be wary.

In this record we have a very confusing birthplace. I'm thinking they meant either Holland or Norhamption, England...but who knows? And the mother's name is different. There has been a lot of chatter online about whether there really was an "Alice Cosford", so this doesn't surprise me.

This one I found for Joseph in someone's tree that was "shared". Now you would think that with four sources that would be pretty solid. But as you follow out those hints, not one of them documents Stratford-on-Avon as his birthplace. They merely confirm his name and a birth in England. In fact, one of the sources was One World Tree. Argh...don't get me started on that topic!

Then you have the Ancestral Files on Family Search. Again, nothing against family research or old family records, but what you see online gives you no idea where this information came from. It was submitted to the records of the Mormon Church, but no citations beyond that appear.

So on this April Fool's Day, don't be foolish or hasty in accepting everything you find-especially online. Do a little digging and a little legwork.  It will pay off in the long run.

Email ThisBlogThis!Share to TwitterShare to FacebookShare to Pinterest
Labels: Ancestry, FamilySearch, Joseph Rogers, Rogers, sources, Who Do You Think You Are
Newer Posts Older Posts Home
Subscribe to: Posts (Atom)