Aaron Rogers was my fourth great-grandfather. When I discovered The Fold as a resource for military records, I discovered his complete pension file which was a wealth of information and also unraveled a small mystery in my family tree. First, Aaron's story. He was born in Harwich, Barnstable County, Massachusetts. In recalling his service for the pension board, here is what he had to say: 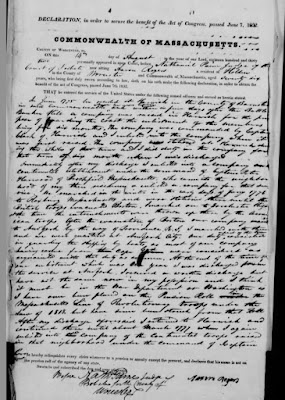 "In June 1775 he resided at Harwich in the County of Barnstable in the said Commonwealth and within four days after the Battle of Bunker Hill a company was raised in Harwich for the purpose of guarding the coast the enlistment of the members being for six months. The company was commanded by Captain Clark of Harwich and  I enlisted into the company when it was first raised. ….I did duty in this company for six months and I was discharged. Immediately after my discharge I enlisted into a company  of the Continental establishment under the command of Captain Peter Harwood of Brookfield, Massachusetts who came into the neighborhood of my then residency and enlisted a company for …. We marched in the winter in the early days of January 1776 to Roxbury, Massachusetts and were stationed there until the British troops evacuated Boston. I marched on to Dorchester Heights at the time the entrenchments were thrown up there by the American troops. After the evacuation of Boston,  our company marched to New York by the way of Providence, Rhode Island. I marched with them and we were quartered at New York City. Our duty consisted of guarding the shipping by boats as most of our company had come from Cape Cod and were considered as acquainted with that duty… At the end of the end of our enlistment which was one year I was discharged from service at New York. I received a written discharge have not the same now in my possession and I think it must be in the War Department in Washington. I have been placed on the Pension Roll of  the Massachusetts Line of Revolutionary troops under the Law of 1818 but have since been struck from that Roll. After my discharge aforesaid I returned to Harwich  and continued there until about March 1777 when I again enlisted into the company of continental troops raised in that neighborhood under the command of Captain ? (probably Captain Bangs)"

Official records being what they were at the time and having apparently lost his discharge orders, he has to appeal to his brother-in-law, Jonathan Rogers, to vouch for him. Here's where the little brick starts to be chipped away from the brick wall. In 1779, Aaron married "Miss Hannah Rogers also of Harwich". I could never find parents or a birth record for Hannah no matter where I looked. I had done quite a bit of looking for Aaron's family so I knew that none of his sisters married a Jonathan Rogers. So, this brother-in-law was Hannah's brother. Still haven't found their parents, but it's a start.

Aaron did finally get his pension for the grand sum of $8 a month but lost it again when his net worth
exceeded the allowed limits. When it dropped again he reapplied.  By this time he was living in Holden 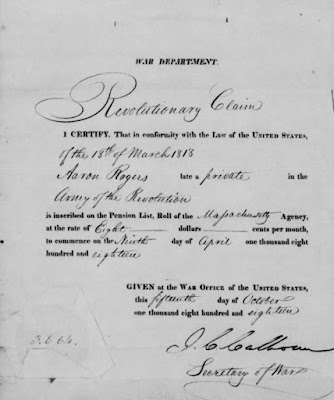 on land he received, I believe as a "bounty" for his service. (sort of the VA benefits of that time) Aaron's benefits, after more paperwork and wrangling, went to Hannah after his death. A fascinating look at the proceedings of those times.

I also returned to the Holden town records. Aaron wasn't in Holden in July, 1776, but I was curious about what the minutes of the town meeting would show: 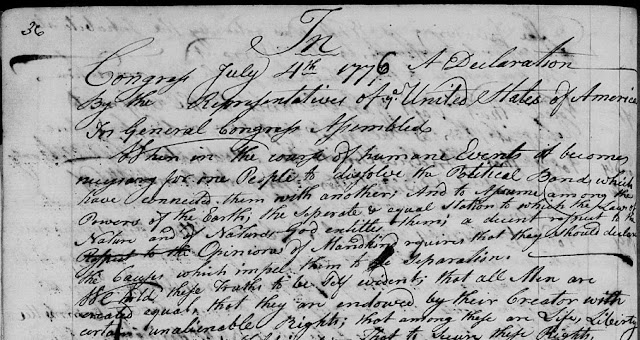 Sure enough, there it is. The Declaration of Independence handwritten in full into the town minutes for posterity. If you look about four lines down on the image you will spot it: "When in the course of human events..."