On the Indiana side of my mother's family tree, we are related to the Dunns. They settled in Rockingham County, Virginia, removed to Kentucky and my branch ended up in Indiana. There are Dunns all over Kentucky, Tennessee and Indiana who descend from this line. This story goes even further back. Samuel Fowler Dunn married Eleanor Brewster, one of many children and one of  three very well-known daughters of James Brewster and Eleanor Williamson. James Brewster and Samuel's father John Dunn were lifelong friends from their childhood in Northern Ireland.

The story of their bravery during the American Revolution has been told and retold in multiple versions all over the genealogical community.  The girls were Eleanor who was 22, Jenette-14 and Agnes-13 at the start of the Revolution. The farm raised sheep and the girls carded the wool, spun it and wove it into cloth to supply the armies who camped on and near their land. They cooked and carried food to the troops. One particular story has them baking bread continually night and day in a particular bread oven brought with the family from Ireland. The oven, it is said, was never allowed to cool. It was handed down in the Dunn family to girls named Jennet or Janet.  Recognition of the bravery of the three girls has been given by the National Society of the Daughters of the American Revolution.You can read various things about the family here.

Eleanor, my ancestor, married Samuel Fowler Dunn. He moved out of Virginia and Kentucky and further north into Indiana, because it is said he objected to slavery.  Jenette married Samuel Irvin and Agnes married William Alexander. The three sisters all ended up in Indiana in the area around Bloomington.

George G Dunn deeded a portion of the family farm to be kept in perpetuity as a cemetery for the descendants of the Dunn family. The land around it was later sold to Indiana University, so the cemetery and chapel now sit on the university campus.  There is a monument to the three sisters in one corner of the cemetery. 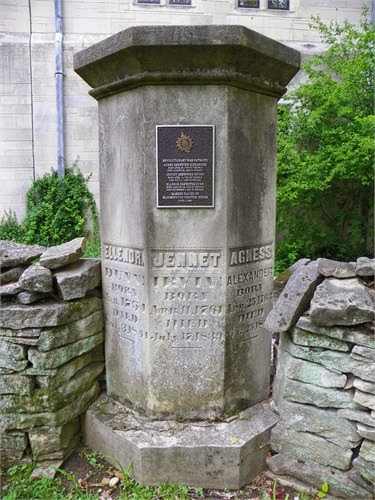 Posted by theailurophile at 6:06 PM No comments: 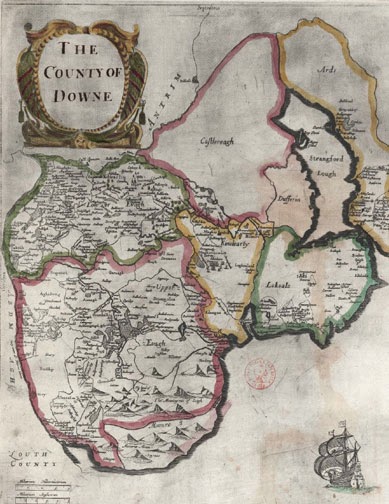 Considering how little my mother actually knew about her genealogy, she could be quite a snob about her family...of course some of her attitudes came from small-town upbringing and things she heard at home as a child.  So I was gleeful to discover that there was quite a bit of Irish background in her family.
What I present here are the bare facts I've gleaned from the few online records and family histories....hopefully in the future an ambitious genealogist will find the records to back this up.
James Dunn and Martha Long married some time in the mid-1700's in County Down, Ireland. Down is in Northern Ireland right on the Irish Sea. I found this rather cool map at one of the Irish heritage sites. James and Martha had several children in Ireland, including my ancestor Samuel Fowler Dunn. At some point after his birth around 1750, they emigrated to the Colonies and lived in western Virginia. Samuel married Eleanor Brewster and moved to Mercer County, Kentucky. From there the Dunns spread out all over Kentucky, Tennessee, Ohio and Indiana. My direct ancestor, John Dunn, was one of the first settlers in Owen County, Indiana.
Happy St. Patrick's Day, mom!
Posted by theailurophile at 5:10 PM No comments: 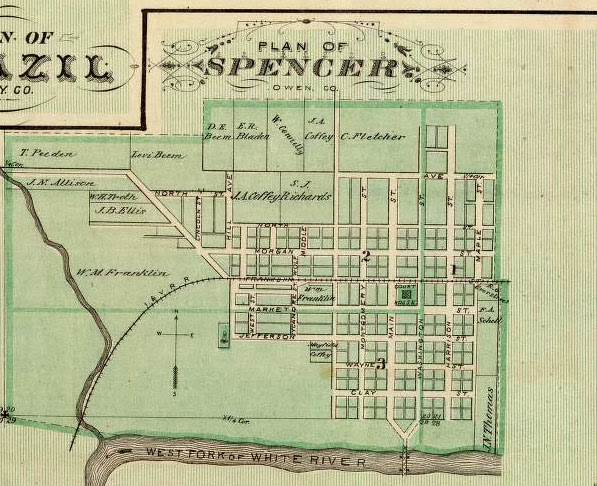 A map of Spencer, Owen County, Indiana where the Johnson, Archer, Dunn and Harrod branches of my family lived. My great great grandmother left Spencer to marry George F Smith and live (eventually) in Fitchburg, Massachusetts.
Posted by theailurophile at 4:29 PM No comments: