A Trip to the Fair

The California Midwinter Exhibition of 1894 was held in Golden Gate Park, just steps from Mary Ann Cooke Piratsky's parents' home. It was held from January to July 1894  following on the heels of the Columbian Exhibition in Chicago. The driving force behind this was Michael DeYoung, then publisher of the San Francisco Chronicle. Many of the exhibits from Chicago were brought west by DeYoung in addition to a number of new exhibits. There had been an economic downturn at the time, and DeYoung was looking to boost the local economy. The man who designed the layout of the fairgrounds was chief engineer Michael O'Shaughnessy. San Franciscans will recognize that name from the street and Muni route into the park named for him.The family connection here has to do with Mary Ann Cooke Piratsky. She was married to James, and seems to have been living in Hollister at the time. She was not allowed to write under her own byline, but wrote for men at the Hollister Freelance. The press pass labels her a photographer. Perhaps, she did a bit of that as well. James was beginning a long career in journalism. More about that later.
Some of the landmarks we know in Golden Gate Park date from that period. The building devoted to Fine Arts later became the DeYoung Museum.And the Japanese Garden later became The Japanese Tea Garden visited by so many people and one of my favorite places.But this was not without controversy. The developer of this exhibit wanted rickshaws drawn by real Japanese men. The Japanese community protested and the idea was changed...German men in makeup and costume pulled the rickshaws. Despite this misstep, the garden itself was salvaged by Park superintendent John McLaren and became the lovely place we know today.
In addition to the coverage from Hollister by the Piratskys, it got a front-page in January in the Los Angeles Herald and in June from the San Francisco Call.
Everyone seems to have made their money. Perhaps this coupon explains the illustration at the top of the post.

Ticket sales were brisk, according to the papers and school children especially enjoyed the attractions.
The Midwinter Fair, as it was called, drew nearly two and a half million people during its run. By any measure, a success.
at August 13, 2020 No comments: 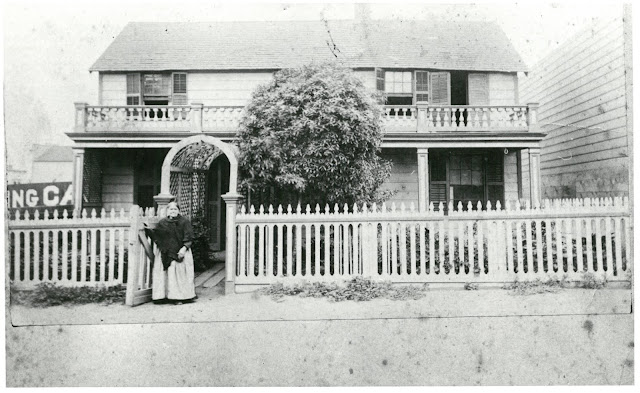 This is Ann Cooke, the widow of Michael Stinson Cooke in front of her home at the corner of Geary and Cooke St.. (San Francisco) I don't know the year, but Michael died in 1897 and she died in 1905 so my guess is somewhere in that time period. 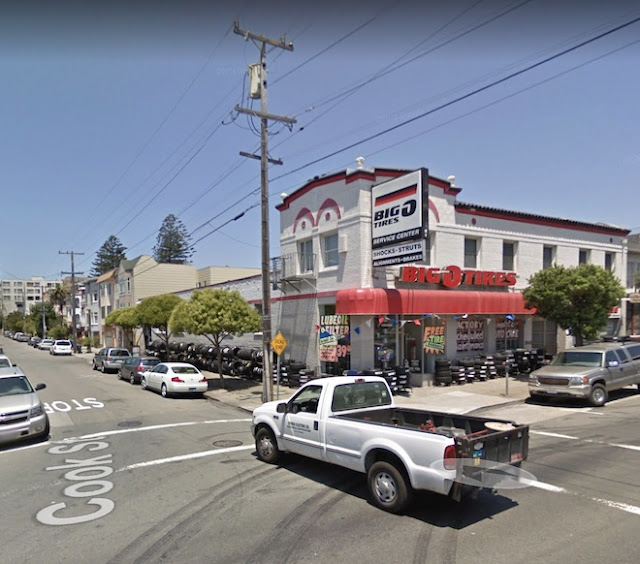 This is that same corner today. Based on a previous much older photo, the house actually faced what is now Geary and sat where the tire store is located at about the spot you see the small tree.
at March 26, 2020 No comments:

A Sense of Character- An Addendum to My Tale of Michael S. Cooke

One of the things I enjoy about finding records, notes, letters and newspaper stories about the more distant ancestors is that it gives you a real sense of their character and their personalities. My cousin Mark Tapply made this point in a previous point about Charles Tapply's army desertion: "Who in their right mind, would go off and fight for a huge corporation (the British East India Company)and their profits, while leaving his wife and 2 kids alone to fend for themselves? That took a lot of courage!"   Good point. His comment made me see things through the eyes of my great-grandfather and gave me an insight into his thinking.

After my last post a few days ago, I was back again at Newspapers.com trying to find anything more I could add to the story of Michael Stinson Cooke. I found it.

Michael Stinson Cooke died on the 27th of October, 1897 at his home in San Francisco. Less than a week later, this touching story ran in the San Francisco Chronicle. I've transcribed it for you because it's a bit difficult to read in the image:


Followed Its Master; They Were Inseparable In Life and In Death

The officers of the Society for the Prevention of Cruelty to Animals were called upon yesterday by people living in the Richmond district to kill a horse that had become quite historical in that locality, but which, since the death of its master about a week ago, had lost its value in this world.
About a week ago M.S. Cook, residing at the corner of Cook street and Point Lobos avenue, died at his home. Through life he had been well known in the district, and Cook street had been named after him. Cook possessed a beautiful sorrel horse, which for the past twenty-five years has been his constant and inseparable companion. One of the sights of the district was to see old man Cook and the horse out every day for their constitutional. They both grew old together.
When Cook died a week ago his family did not know what to do with the horse. During life it was too dear to Cook to part with, but since Cook had died the animal's vocation in life ceased. Fearing that if allowed to live the horse might fall into other hands, and having for themselves no further use for it, the family decided to have him shot. When Office Walton arrived, Mrs. Cook refused to have the shooting done in an other place save the lot where the animal has been brought up. So he was compelled to kill the animal there.

What a lovely and touching story this is! And it reveals so much about the character of these people that they showed such concern and compassion for the horse that had become a member of the family.
Just another reminder that good genealogy is about more than facts and figures.
at January 26, 2018 2 comments:

Meet my latest discovery in my search for the Irish side of the family. Ciaran Brett had been in touch with someone online who said his ancestor was a Cooke who hailed from Clooningan. Well, if that proved true, this had to be another family member. Clooningan is a tiny little townland. If you're a Cooke from Clooningan, you're some kind of family.

Here's a tree to make it clearer. 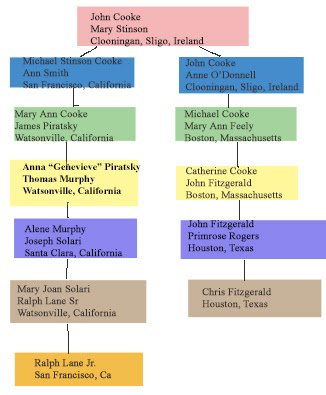 Ralph Lane, who has so kindly provided the photos, is my fourth cousin once removed. His ancestor, Michael Stinson Cooke was a San Francisco pioneer.

Many of the Irish who came to early San Francisco settled at the top of Portrero Hill. Michael Cooke, however, settled in what was once thought of as the sand wastelands at a place called Lone Mountain. He and a partner owned the land on the north slope of Lone Mountain in the area where the university is now. He was a dairyman. His daughter described the early home as a "two room shack" where the boards were brought in one board at a time. Mary Ann used to say that she was the first white child born west of Larkin Street. Her birth date is given as 1855. This was very early San Francisco. It would have been rugged.
Here he is in an early San Francisco directory. By 1862, the city fathers already had plans for this area. You can see what their plans were by looking at the directory: "nr. cemetery". When they began planting the dead all around his land, Michael Cooke sold the land to Bishop Alemany for the creation of the Catholic Cemetery. He did some tenant farming in the East Bay and earned the money to build on a lot back in the old neighborhood.
Here is Ann Smith Cooke in front of the house they built. It was right on the corner of Cook Street and what is now Geary Boulevard. Ralph Lane says there is a tire shop and an empty lot there today. 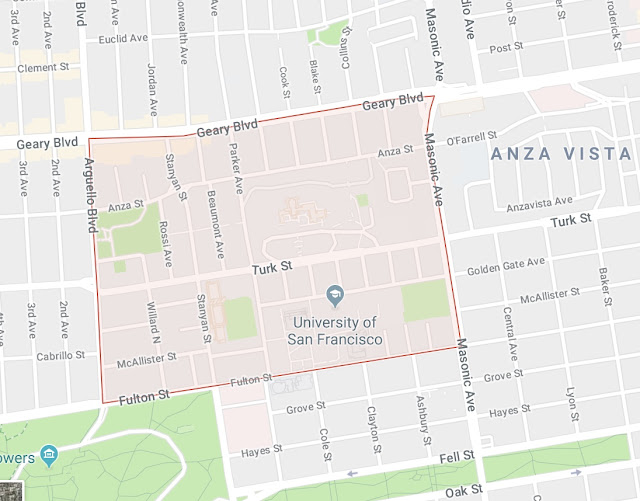 The area outlined in red is the land Michael once owned. That's Golden Gate Park at the bottom left. The cemeteries were moved to Colma after the turn of the century. Just north of the red area you can see Cook Street and Geary where the newer home stood between Cook and Baker. Michael went on to work at various jobs. Later censuses list him as a teamster. Ralph wrote me this " I have an invoice from 1879 on stationery of M.S. Cook, dealer in Hay, Grain, Feed, Wood and Coal, corner Geary and Cook Streets, (goods delivered to all parts of the city and suburbs free of charge"
In this early picture looking down from Lone Mountain, you can see the Cooke house under the red arrow. The wooded area at the dead end of Cooke Street was a cemetery, the bare land in the far ground is what is now the Presidio.  Point Lobos (now Geary) runs in front of the house.

I'm sure there is lots more to be discovered. Ralph has also forwarded a letter and an obituary that shed more light on the family, both the San Francisco branch and the Clooningan branch. The more I discover, the more I want to know. I spent a year in San Francisco and never had a clue about the gold right under my feet.
at January 21, 2018 1 comment:

I love the idea of capturing a small slice of life from the times in which my ancestors lived. The wonderful Lisa Louise Cooke has remastered an earlier podcast where she suggests using silent films as a way of putting the lives of your ancestors in context; looking at life at the time and appreciating early films your ancestors may also have enjoyed. You can listen to the whole podcast and read the show notes here. The still above is from a movie called "A Trip Down Market Street" and it was filmed just four days before the earthquake and fire. As I listened to Lisa describe the film in the podcast I realized, "I had an ancestor living in San Francisco at this time!"

OK...so I need to set the scene for my cousins. This was not a direct ancestor. I've made a little tree that shows how we are related.

So my three times great grandmother, Margaret Archer, had a younger brother Samuel Milton Archer who became a doctor and moved west to the Salinas Valley around Monterrey. He had two wives and a very large family. His eldest son, Aretas Allen Archer, became a San Francisco policeman.

For obvious reasons I couldn't find a 1906 directory, but he shows up in both 1905 and 1907 living with his sister Agnes Archer and her husband Christian Melin, a master mariner.

The Melins moved to Church Street briefly after the earthquake, but by the 1910 census they were back on Fair Oaks Street. This is between Noe Valley and the Mission District near Mission Delores Park. Did they "camp out" in the park after the earthquake?  Who knows? The area south of Market Street shook pretty hard.
You'll notice that I've captured a still with a policeman in it. It's a little tip of the hat to Aretas Archer.  Go to YouTube and watch this film all the way through. It's just a little bit of light-hearted fun before a very grim chapter in San Francisco history, but it gives you a glimpse of a time gone by.
at July 15, 2014 2 comments: