I can remember standing fascinated in front of the windows of Filene's when we made trips into Boston at Christmas time. They always went all out with the decorations. This particular image dates from 1954. In around 1956 or 1957 my dad and I took a trip into Boston from the suburbs. Most certainly we were Christmas shopping and very likely took a trip through Filene's. But my memory is of walking along Boylston Street past a record store. They had bins of vinyl out front and speakers overhead with whatever they were promoting that day. That particular day it was Mahalia Jackson's new Christmas album. I remember my dad stoppping, his face broke into a wide grin, and before I knew it we were headed home with a copy of the album. For years that was the music we opened gifts to on Christmas morning. Even now, it's not Christmas until I've played Mahalia.
at December 03, 2014 No comments:

After a thorough search of the internet I had no clear answers and apparently lots of people wondered the same thing. I found the question asked and answered in a million different ways. Some said it comes from the Feast of Seven Fishes where Catholics avoided meat on certain feast days. Somehow in Anglo-Protestant America this origin became quietly obscured. Some say the Irish brought it with them substituting oysters for the traditional ling fish. Others had the origins in Germany. My mother's family was not Catholic or Irish or German. They were Yankee, Protestant and went back in New England to coastal Maine and Cape Cod. Chances are good it was a practical decision. Oysters were cheap and plentiful. Christmas, the next day, was an occasion for a big holiday meal. It would make sense to have the somewhat lighter meal of stew the night before. My family was in good company. In the December 23, 1931 edition of the Fitchburg Sentinel I found this: 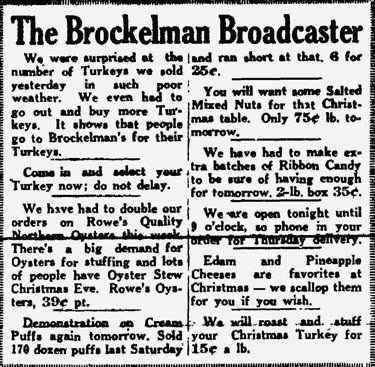 Brockelmans was a popular Fitchburg grocery vendor of the time and this was a thinly disguised advertisement. 39¢ a pint is a great price for New England oysters. I paid considerably more for mine.
One thing I did find in my search is that while oyster stew was a tradition in many families all over the country, the commenters were evenly divided between the oyster lovers and the oyster haters. After years of oyster stew, the tradition quietly died among the haters and new food traditions were born. My brother is one of the haters. I however, will make my stew, thinking of my mom as I do and upholding the family tradition for just a little bit longer.
at December 22, 2013 No comments: