W. B. Rogers and the American Civil War- The Story Continues

By the end of August, the 36th Massachusetts was as trained as they were ever going to be. A history of the 36th tells us that on September 2nd, they boarded train cars and left for Boston. The narrative tells us this:

"On the arrival of the regiment in Boston the line was again formed, and the Thirty-sixth, receiving a brilliant ovation from the citizens, marched through "Washington street, down State street to Battery wharf, where the steamer " Merrimac," a new and large ocean steamer, was in readiness to receive us. One-half of the steamer had been assigned to the Twentieth Maine, Colonel Adelbert Ames, and his regiment was already on board, having arrived from Portland earlier in the day.

In the crowded condition of the steamer there was, necessarily, some delay in getting the companies into the places to which they were assigned, and also in transferring the horses and baggage ; and it was not until late in the evening that the embarkation was accomplished ; then the steamer dropped out into the stream."
Now if the name "Merrimac" sounds familiar, this is not THAT ship. The Merrimac of great fame was scuttled in Virginia by Union forces, raised by the Confederacy, and plated to become the famed ship in the battle of the Ironclads. There were actually a couple of ships operating under that name at the time and our Merrimack (sic) was only one of them. Thanks to the guys over at the American Civil War Forums, I was able to track down some information on our steamer and the picture above which we believe is the right ship. It served to transport troops all through the Civil War, but came to a sad end in 1887 near Halifax, Nova Scotia when it wrecked in thick fog. Here are the basic facts for this ship, as found by my friends over at the Forum.

And Fortress Monroe or actually, Alexandria, Virginia was the very destination for W.B. and his Holden friends. Conditions on the ship, however, were pretty primitive. 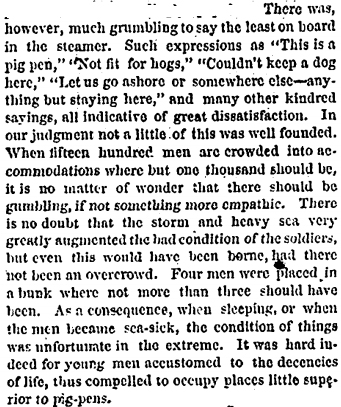 This came from a previous newspaper report, but as you will see, W.B. and company shared their feelings. Keep in mind that I corrected only the basics for clarity. The spelling and grammar are all his.
Aug 14/62 Steamer Merrimac
Dear Wife
We started from Boston yesterday morning and we are on the broad Atlantic and no land in sight. I have been seasick and a great many were sick yesterday. We are crowded most to death. There is a …? Regiment on board which makes about 2500 men. I never experience this before saying he had nowhere to lay his head. I have had to lay on deck as best I could. There is fearful confusion and I hear nothing but oaths and vulgarity. There is nothing for me to enjoy but assurance that there is a friend in Heaven. It is a beautiful morning with no land in sight. We don’t know where we are bound. There are a great many rumors about our destination but I shall be glad to get released from this crowded craft. I feel thankful that I am well and in the hands of a just God who doeth things well. My mind dwells on those dear ones at home. I am thankful you are so far away from such scenes as I have witnessed since I left home. Those in their quiet country homes know but little what there is in this wicked world.  The members of our company seem like Brothers to me. It seems like going home to get with them as it is all the home I can claim at the present. I want to hear from you very much but cannot tell you where to direct your letters. I will write as soon as we get landed if …? And tell you all the news. Kiss the children for me and give my love to all.
From your loving Husband
W. B. Rogers
The regiment sharing the ship, according to the history I read, was the 20th Maine.

Steamer Merimack
Saturday Sept 6 /62
Dear Wife
We are sailing up the Potomac and have been confined on board this old craft since Tuesday night. We are packed in like a lot of hogs. I shall be glad to get ashore oncemore. I can be thankful that it is as well as it is.
I feel first rate. the scenery this morning is ….(?). we are continually passing vessels of different kinds and we can see plantations and huts which makes it very pleasant as we have been out of sight of land for two days and I haven’t heard much but profanity. Oh how can men be regardless of their accountability to God. If ever I felt to rejoice in Christ and pray for his grace to sustain me it has been for the last few days. Oh we know not how to realize the comforts of home until we are deprived of them. We expect we are going to land at Alexandria some time but we know not what is before us but there is a friend that will go with me if I put my trust is him and I can pray for those Dear ones at home.
Oh pray that I may see you once more. I am not homesick because I feel that I came here to discharge my duty and hope I shall have strength and courage to do it.
Tell Eugene that I often think of him. Kiss little Ned for me. Give my love to Joel and tell him I am looking on Old Virginia soil at this moment. Give my love to all relatives and friends.
I must leave off writing. there is so much confusion and crowding I cannot half write. I will write again as soon as we get located and tell you where to direct you letters. Yours Truly
W. B. Rogers
So here is the route taken, by the history of the regiment I found and by W.B.'s letters. They boarded the City of Norwich and landed in Washington on around September 7, 1862.
At the point they reached Washington, they were assigned to the command of General Burnside in the 9th Corps. Here the history skips around a lot from my account by W.B.. There was a great deal of marching in which they just barely escaped taking part in  the Battle of Antietam and the Battle of South Mountain. 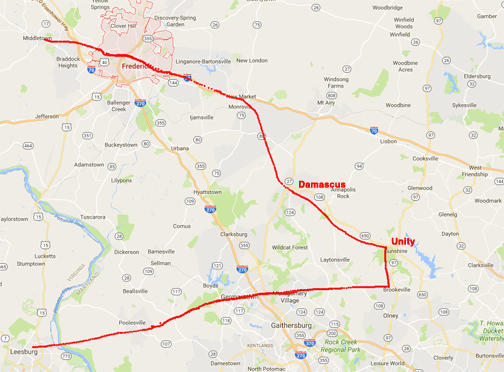 They marched from Leesburg, Virginia, to Brookeville, Maryland and on to Unity, to Damascus, to New Market and then just beyond Frederick to Middletown where they camped briefly. 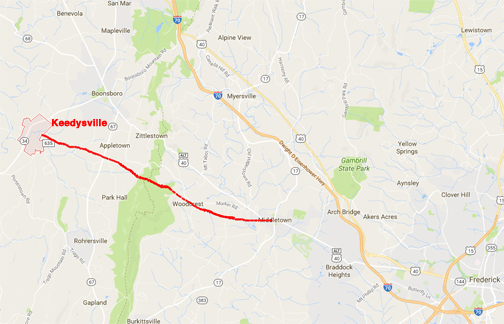 Dear Wife
I have just been looking at your and Eugene’s miniatures and am wondering how you are and what you are doing. Oh if I could spend this Sabbath with you and the little ones but I feel that God is watching over you. we don’t know how to prize God’s blessings until we are deprived of them. I hope I shall be more grateful to him and better discharge my duty to him. I hope you will never cease to pray for me. I never shall for you and pray that I may be permitted to return to you unharmed. My health has been very good ever since I left home. I never shall forget that morning when last I saw you and those Dear little ones. All is very uncertain in this world. If we live as we should we shall soon be at rest. (the rest of this letter seems to be lost)
The 36th had just done a tremendous amount of marching around, yet he doesn't mention it at all. Of course, we don't know what the missing part of the last letter held.
Now I'm wondering. Was that little "fairy album" of miniatures that I had and sent on to the cousins the album W. B. took to war? Eugene would have been 9 at this time and "little Ned", my great-grandfather, was less than a month old. It sounds like he "just" got to look on Ned before he marched off to war. He's been near two very big battles, but hasn't entered the battlefield yet. He sounds homesick, but making the best of his situation. This is what soldiers do. More to come....
at April 02, 2017 No comments: