Early in my research I read that graveyards can be a fine source of information for your family tree.
Because I knew so little about my father's family, I went back to the one document I had that might
be of some use. It was an old envelope that once held a deed to a cemetery plot at Holy Cross Cemetery in Malden, Massachusetts and on the front was the address of the plot. Most cemeteries are very cooperative, and for a small fee will send you particulars about a cemetery plot. What I got back from Holy Cross was a list of the Cook relatives buried there and the ages at death and internment dates. This gave me some great clues to go on to solve the mystery of Mary Feely, my great grandmother who seemed to vanish after the 1930 census. Eventually, when the 1940 census was released I found her in a rest home in Roxbury. From there it was a matter of sending for a death certificate and THAT gave me the names of two great-great grandparents in Ireland.

After I'd been doing this a while, I discovered FindaGrave. This is an effort to catalog online all the cemeteries and the folks buried there. If you have a city or better yet the name of a graveyard, a volunteer may have made an entry for your family member or may have taken a photograph of a gravestone. I found LOTS of my Rogers relatives this way. I joined and made a few entries of my own. Through the kindness of a member of the local historical society, I now have this photo for my Civil War ancestor, Winslow Brainard Rogers.

This is the memorial stone put up for him by the Civil War Veterans society. Another kind person went to the town hall and added a photo of the inscription there which includes his name.

You can also put in a photo request. The chances of getting to Malden anytime soon are slim so when I got to the Fitzgerald side of the tree I turned to this service. I knew my grandmother, grandfather and probably my great grandparents were also in Holy Cross. I put in a photo request and crossed my fingers... I had to go back and give the volunteer a little more information, but an 800 number call to Holy Cross gave up the Avenue and Plot. And now I have this memorial at FindaGrave. 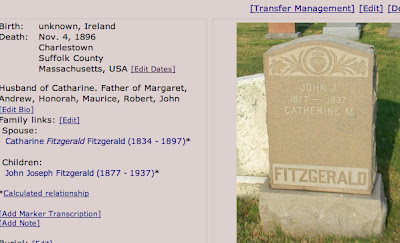 The blue links are a way to link one family member to another. So once you find one relation, you can often get information for an entire family. Be careful however, I have frequently found that these entries have differences in dates and other information from the official records. The cemetery often got information from family members and the FindaGrave entries are done by volunteers or family members as well. The happy news is  finding an entry with lots of biographical information: what he did for a living, who he married and in what order, military service, etc.

There is another somewhat newer site called BillionGraves. I haven't explored their site extensively, but it seems to work in very much the same way. Both places rely on volunteers to put up memorials and take photographs that have been requested. The polite thing to do would be to fill a request with a trip to the local cemetery. When it gets a little cooler, I'll go over to Hollywood Cemetery and see what I can do to pay it forward.
Posted by theailurophile at 10:29 AM 2 comments: