This is my grandfather Harry Winslow Rogers pictured during the time he was courting my grandmother Primrose Victoria Tapply.  Sadly I never knew him. But I had heard stories. Here's another, more innocent photo from a slightly younger age.
He had vivid red hair and blue eyes. The family called him "Rusty" to distinguish him from Harry Tapply. He was very musical, he had some artistic talent, he was "handy" and also...just a bit naughty. Well I heard stories anyway.

The first hint that the stories might be true came as more records came online at Ancestry and I found
a marriage record for one Harry W. Tapply marrying a Grace Elizabeth Carroll in Bellows Falls, Vermont. " Ah, a youthful marriage, " I thought. So I turned to the Fitchburg Sentinel to see if I could find anything else. And what I found made me chuckle. We always cluck over the things that young people get themselves into: the alcohol, drugs, partying, bad behavior. We forget that young people have always sown their wild oats. Apparently my grandfather was no exception. 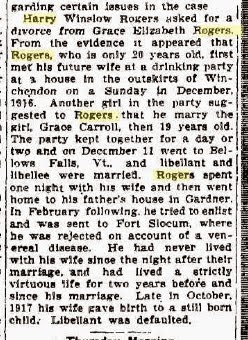 So he went to a house party that seems to have gone on for several days, there was drinking and carousing and girls. Someone made a bet and he ended up in Bellows Falls marrying this girl. Then he went home as if nothing happened and moved back in with his parents...except now the girl was pregnant.  Sadly the records confirm  that the baby was stillborn. And to top things off, Harry expected to straighten himself out by enrolling in the military, but was rejected due to a case of the clap.  I can just imagine how that went over at home. (not to mention being in the Sentinel for all to see) Doesn't this sound like something you could read in the paper today?

"Spoiled" was my mother's pronouncement. I'm sure that came directly from the mouths of the two aunties, Lotta and Clara. They doted on him as well. Luckily, as most kids do, he learned from his mistakes. He got his divorce, moved on. Became a soloist at the Rollstone Congregational Church, met my grandmother and settled down. He struggled a bit during the Great Depression,  but eventually became head of a crew that built and repaired roads around Fitchburg. He also was responsible for a lot of the signage. For those who live in Fitchburg, some of those early orange and black street signs in the slightly script-style font were my grandfather's handywork.

In January of 1952 he went out on a stepladder to clear an ice or snow from the roof. He came back inside, had a heart attack and died. I was born 11 months later....on his birthday, which is today.  I like to believe that was no accident.
at December 31, 2014