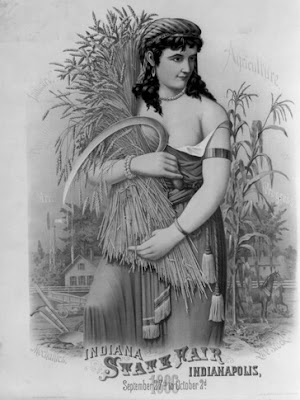 If you are of a certain age, you probably remember the game show What's My Line?  Watching Downtown Abbey has made me even more curious about the occupations of my ancestors...particularly the English branches, but the American family is fascinating as well.  So I've been going through the tree and doing a little digging.

Of course I found farmers..lots and lots and lots of farmers. Farmer in Maine in the Smith, Lowell and Richardson families. Farmers in Indiana, Kentucky and Virginia in the Dunn, Johnson, Archer families. And of course farmers in Massachusetts in the Rogers family. What I found was the some families farmed the same land or the same area for many generations, but as the United States went through the industrial revolution I found lots of tradespeople as well: coopers, grocers, salesmen of farm equipment, a few blacksmiths, mechanics and factory workers. In the mill towns of Massachusetts I found a LOT of boot makers. Holden had a shoe factory that employed many members of the Rogers family.

The next generation became professionals: Isaac Johnson was a lawyer (although he maintained farm land as well). Samuel Milton Archer was a doctor in the Salinas Valley of California.

And some professions became a family affair: George Smith, Reuben Lowell Smith, and Edward Rogers were all firemen/ conductors for the railroad. The Tapply family has been in the building trades for several generations. James Henry Tapply worked at various times as a carpenter and bricklayer. Two of his sons are listed as builders: James Henry Tapply Jr. and Harry Tapply. His son Charles, my great grandfather, was a paper hanger and painter after he left the police force. Charles Earnest Tapply Sr. (his son) was a lumberman. And even today we have Mark Tapply who does fine woodwork and cabinetry and did his father Chuck Tapply before him. Charles Earnest's other son William R. and his son were lumberman.  William's grandson Billy Tapply deals in fine wood flooring. Amazing how many members of this branch have "builder" or  "carpenter" in the census records.

Even though there were farmers and people "in service" on the Freed branch of the family, it appears that the Tapplys were merchant/craftspeople. This is where the research got interesting. Of course I've talked about James Henry Tapply's father John who was a master cordswainer. You can read more about them here.  I found a wonderful description of the cordwainer's art on this website along with a reference to a district in London where they once practiced their art. 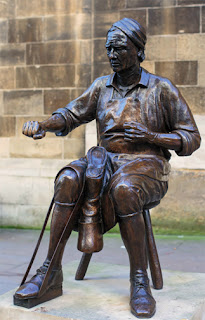 The professionals all had guilds dating back to medieval times. They persist today with elaborate guild halls in London. It seems many of them do charitable work these days,  but the buildings maintain records which could really be useful for genealogists. Edward Lansdell Tapply was listed as a master linen draper which appears to be a dealer in dry goods, but another source said that in the mid-1800's he may have been a bespoke dealer of fine goods for shirting.
This same branch of the family had a number of family members in the coffee, tea and spice business. Edward Lansdell's brother William Tapply and his sons dealt in these goods as well as pickles. Perhaps they were members of the grocer's guild. I love that part of their coat-of-arms includes a clove harking back to the days when people traveled to the Far East to bring back spices.

William's son, Richard Tapply, is listed as a brewery director. Of course the brewers had their guild as well. It was Richard's son Allan who penned the Tapply family history.

On the other side of this family we have John Benn, father of Ellen Freed Benn Tapply. He was a hansom cabbie in London. He is still a cypher in my research so perhaps a visit to the hackney and cab driver's guild will reveal records of his license. 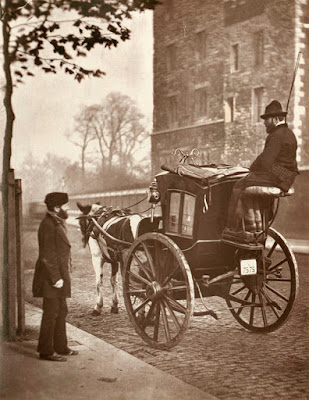 So while my relatives were never the "lords of the manor" like the Crawleys, they all seemed to do pretty well for themselves; truly the "butcher, the baker, the candlestick maker".  Records of their apprenticeships, records of their businesses, land purchases and agricultural census records can all inform your family research. I look forward to finding even more clues in these records.
at June 01, 2015