As I've mentioned before, I get a lot of inspiration for my searching from listening to podcasts about genealogy. Two of the best are from Lisa Louise Cooke. Her Genealogy Gems podcast has lots of good ideas. She also has a podcast through Family Tree magazine. In the February podcast she talked with several experts about how having an unusual surname can be an asset in genealogical research. I wouldn't strictly call the Tapply surname unusual, but the spelling with two P's seems to have been a variant that developed in a particular area of Kent. In early census and birth records, all my Tapply relatives were actually Tapley. So if you are a two-P Tapply we are most certainly related somehow. What's even more exciting is that there are all sorts of resources online to explore the popularity of your surname. The map on the left is the incidence of the Tapply surname in modern England. The right is the Tapley surname. You can see that southeastern England and Kent are hotbeds for Tapply and Tapleys. My cousin Sue tells me that her brother (living in Kent) runs into other Tapplys and Tapleys all the time wanting to know his village of origin or which family line he belongs to.

Why would this matter? Well, let's say you're having trouble pinning down where your relatives with the unusual surname emigrated from or immigrated to; this map might give you a start deciding where to look. It also tells you whether the name has remained "active" or is dying out. 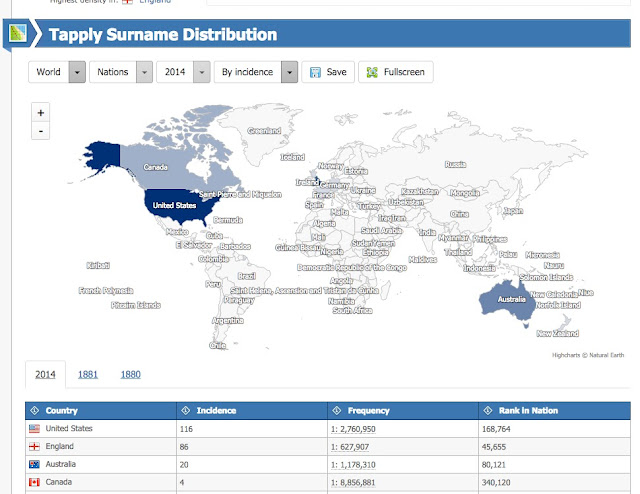 This map tells me where in the world I am most likely to find Tapply with my particular spelling. You can see that the highest incidences are in the United States, England, Australia and Canada. Change the spelling to Tapley and you can add in New Zealand. 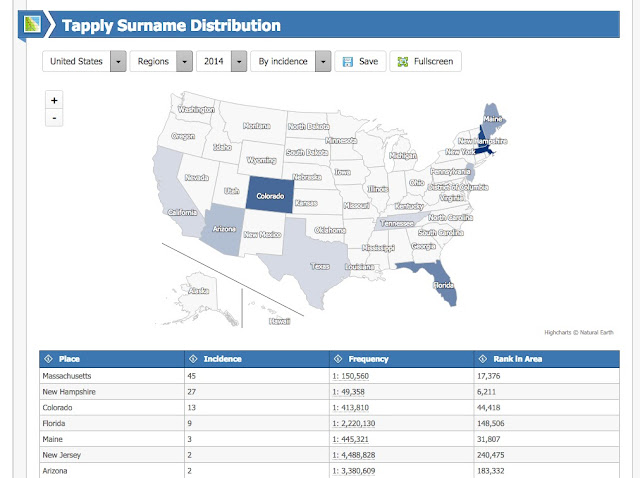 Going one step further you can see that most of the Tapplys in the United States are people I know are directly related to me. Massachusetts, New Hampshire and Colorado would be where they are. Since Charles Tapply Senior had only 3 sons and mostly daughters this map reflects the children and grandchildren of Bob and Charlie Tapply. The only outliers are Tennessee and New Jersey. That might be interesting to explore. (There are some Tapplys in the U. S. descended from Charles's brother Thomas J. Tapply. ) Since the highest incidence of the Tapply surname on the first map was in the United States and on the second map it appears to be direct relatives, I think we can say that the name is declining.
You can see where this would be useful in tracking down relatives and determining where they fit in the tree. Be sure to click on the two links I've included and see if you can track down an unusual name in your family tree.  I think this is lots of fun.
Posted by theailurophile at 12:37 PM