Black Sheep in My Tree 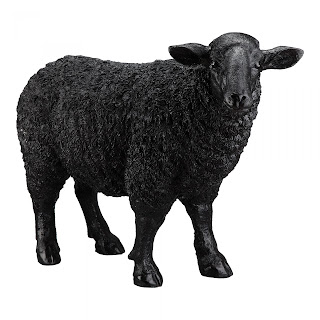 This is a brief post about a not-so-close relative who qualifies as a black sheep. (his wife would be my first cousin 8 times removed) Truly things don't change much over the years as you shall see.

Hannah Rogers (my cousin) was the granddaughter of Joseph Rogers who arrived on the Mayflower. Her mother was Elizabeth Snow.  She married Amaziah Harding in 1690.  The story is that he was a miller in Eastham. We know that he inherited Eastham land from his own grandfather, but details about Amaziah are hazy. Together Hannah and Amaziah had nine children. It was not, however, a happy marriage.

The date of the drama would seem to indicate that the pair were in their sixties or later. Certainly their children would have been grown.  This quote is from a book called Legal Executions in New England; a Comprehensive Reference:
"Amaziah Harding, white, age unknown, Murder. The crime was committed on July 18, 1733, at Eastham, Massachusetts, Amaziah Harding and his wife Hannah Rogers Harding (white, age unknown), had been locked in an abusive marriage for more than 20 years. The situation finally reached a climax on the above date when Mr. Harding beat his spouse to death. He then laid her body down upon their bed and carefully tucked it in with blankets because he wanted to make it look like she had died of natural causes. When Harding was satisfied that the scene looked convincing, he summoned a neighbor woman and told her that his wife has died. He also asked the woman to prepare the body for burial according to the local custom. When the woman removed the bedclothes preparatory to washing the body she saw numerous cuts and bruises on the decedent. This led the mortician woman to suspect foul play; she knew that Harding has been an abusive husband and she flatly refused to dress the body for burial until the coroner had been summoned. Harding scoffed at this and declared himself "well satisfied" that his wife was dead. When asked why he felt that way, he said that his wife "had been a plague to him".

I have seen versions where he threw her down the mill stairs, etc. etc. but since the trial transcripts burned in a fire, this seems to be the most dependable account. The case was infamous even at the time. This appeared in the Boston Weekly Newsletter:
"We hear from Eastham on Cape Cod, That the beginning of last Week, amost barbarous Murder was committed there, on the body of one Mrs. Harding,suppos'd to be done by her own Husband Amaziah Harding; he having for agreat while before, as 'tis said, carried it very ill towards her, to theimparing of her Reason; and now being found in the Room alone with her,where she lay dead near him, with her Neck twisted and broke, and about herMouth and Throat much beat and bruis'd. The hard-hearted Man being thus surpriz'd, and charg'd with the Fact, by those who first discover'd it,endeavoured to put an end to his own Life, by stabing a Knife into hisBowels, which stroke not proving mortal immediately, he went to repeat it,aiming at his Breast, but was prevented by those about him, and on Fridaylast he was sent to Barnstable Goal."

All that strangling and stabbing! Grisly stuff.
And the trial even featured the testimony of the neighbor herself, Mary Freeman  and her daughter-in-law Hannah:
"Mary Freeman of Lawful age to give Evidence testifies [Information?] came hastily on or about the eighteen day of July 1733 and Informed me that my neighbor Maziah Hardings wife was Dead it being something surprising to me to hear so for I was informed by his son Corneilis less than one hour before that shee was well & in health whereupon I went immediately with my Daughter In Law Hannah Freeman to sd Maziah Hardings house & when I came there I met with sd Maziah Harding at the Door of his house I then asked him if his wife was Dead. He answered yes & he was glad of it whereupon I went in to sd Hardings house & there I saw his wives Dead body lay on a bed wrapped up in bed clothes & when I looked on her I saw a [proof?] on her cheek & on her throat & lip that the blood was jelled which seemed to me to be occasioned by some bruise or hurt. Then I asked sd Harding how his wife came so suddenly to her end whether he took notice shee had not been well. He answered shee was as well as shee used to be for ought hee knew & he sd shee had drunk her fill of Rum and sat on the Door sill & he laid on the bed & fell asleep & when he awoke he called for her but shee gave him no answer. Then he rose and went into the other Room and found her Dead on the bed. I took notice that sd Harding was in a strange frame and seemed to be disguised with Drink and often Repeated these words [to wit?]. Harding is a man shirt or no shirt every inch of him & he often Declared he was glad his wife was Dead. I reproved him and tould him I was sorry to hear him say so & asked him why he was glad of it. & sd Harding Replyed & sd because shee had been a Plague to him for above these twenty years past & he hoped now he should git somebody to keep his house clean & look after his things and many such like expressions. & sd Harding further sd his wife was now gone to paradise among the Royal breed & would be clothed in Robes of glory and many such like expressions. & then sd Harding was very urgent with me to help clean linen to bury his wife in & he would pay me for it & was very desirous that I would lay out his wife & sd he would help me to do it urging shee might be buried with all speed fore he sd shee was covered with lice, Rags & dirt. I told him I would not meddle with her nor advise any others till a Jurie had past upon her. Whereupon the sd Harding Replied & sd a Jurie, then sd he there will arise a Cursed Damnd Mobb & seemed to bee then something surprised & uneasy & [disembled?] and sd there was no occasion of a Jurie for others he named had died suddenly & no Jurie on them. Then I told him there was not the like occasion of a Jurie for others he named had died when several were present. Then he seemed to be more Restless in his mind & sd this id the fruite of mens wives taking their Neighbours parts against their husbands which has brought it to this & uttered many sensurious Reflections on his neighbors. "

It didn't take the jury long to render a verdict. It remains unclear whether the man was simply a chronic wife-beater or had snapped completely at age 63. I suppose it doesn't matter much.
"The Jurors of our Lord the King upon their oath present That Maziah Hardingof Eastham in the County of Barnstable aforesd Yeoman not having the fear ofGod before his Eyes but being instigated by the Devil with force and arms andof his malice forethought on the Eighteenth Day of July last at Easthamaforesd and assault on the Body of Hannah his then wife and in the Kings peacethen being did make and then and there With force as aforesd then and thereFeloniously twisted the neck of the said Hannah and Dislocated the same, ofwhich the said Hannah then Instantly dyed so that the said Maziah Harding ofhis malice prepense as aforesd Feloniously murdered the said Hannah his wifeContrary to the Peace of our sd Lord the King his Crown and Dignity, and theLaw in that case made and provided Upon which Indictment the said MaziahHarding being arraigned at the Barr pleaded not Guilty, and for trial puthimself upon God & Countrey, a Jury being sworn to try the issue between ourSovereign Lord the King and the Prisioners Defense went out to Considerthereof and returned their Verdict therein upon oath that is to say that thesaid Maziah Harding is Guilty. Itfs therefore Considered and Ordered by thecourt That the said Maziah Harding shall suffer the pains of death."

The coroner's findings and the testimony of the two Freeman women did the trick. Here's the end of the article in the Trials  article.
" Amaziah Harding was then charged with capital murder. A grand jury first indicted him and then a petit jury convicted him. A circuit judge sentences him to death. Amaziah Harding went to his doom reviled as an uxoricide. he swung from the gallows at Barnstable on June 5 1734."

An unrepentant Harding denied his guilt to the very end.
Posted by theailurophile at 10:15 AM