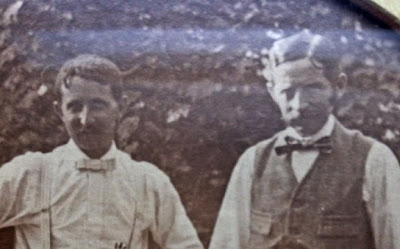 On the left you have Eugene Harrington Rogers. At the time this story begins, he had lived in Fitchburg, Massachusetts for some years, was working as a sign and artistic painter and living on Chestnut Street. On the right is my great grandfather Edward Winslow Rogers. I made a surprising discovery, which has lead to what I think is a romantic tale and the merging of two old families.

I have relished a great resource on Ancestry in the local and city directories. Some of these go back a long way, some list occupation and some will list a death date. That was how I tracked down a date for my grandfather Fitzgerald. But I was looking at the Fitchburg Directory for 1891. Most unexpectedly I found this

So this is the first listing of Edward in Fitchburg, where he had moved from Holden to be near his brother. I knew OCRR meant railroad....but which one? That lead me to the story of the Old Colony railroad. The Old Colony Railroad served lower Massachusetts, the Cape and parts of Rhode Island. They ran large steam trains and I found a good example. 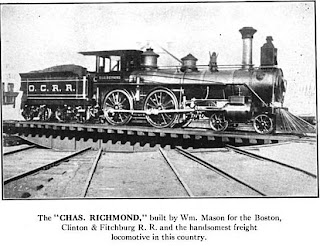 Old Colony did very well for a time, carrying people to the shore at a time when few people might have had an automobile. As the line prospered, they added a northern spur which ran to Fitchburg.
Edward became a railroad fireman, boarded on Day Street which was walking distance to the wonderful old Union Depot in downtown Fitchburg. 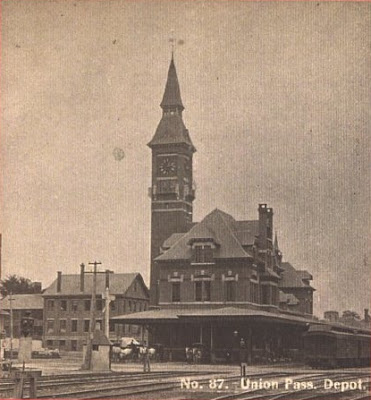 And there was George F Smith, a railroad engineer for the Fitchburg Railroad, living on Goodrich Street with his grown daughter boarding in his home. My imagination began to work. George had contact with the other engineers and firemen who came through the station. Here is this newcomer to town, Ned Rogers, a lonely boarder and George invites him home to Sunday dinner. At the dinner table are his three lovely daughters, including his eldest, Cora. Now maybe it didn't happen quite that way, but I'd like to think that I've discovered the story of the meeting of Cora Elizabeth Smith  and Edward Winslow Rogers, my great grandparents. They were married in 1893.
Posted by theailurophile at 11:02 AM