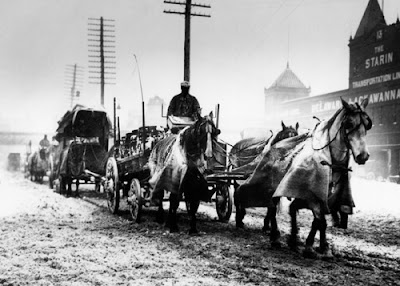 I know very little about my father's side of the family. I know even less about his father's side of the family. When I began I knew that someone on that side was possibly named Andrew and he married Catherine. She was a Fitzgerald as well. The census records bore this out. I found Andrew, Catherine, my grandfather John J. and his siblings. I kept working back and back through the records trying to piece that side of the family together. I found what I was sure was an early census, a marriage record and then....a passenger list. But the curious thing was that on every document I found a different birth date for Andrew Senior....different ages. It was all very curious.

My father never knew much about the family. Almost nothing about his father's family. His cousin Catherine knew a little bit, but she was never close to my father. And he said the family was always "secretive" and closed-mouthed. My dad was an only child and his closest cousins were on his mother's side. A dead end.

I decided to try something that was suggested on Ancestry and make a table with all the pertinent information. Maybe my error would reveal itself.

From this I would guess that the passenger I found was the wrong Andrew. I remember seeing an immigration certificate in the family papers that gave 1850 as the year he arrived. But this can't be him.
I suspect that the 1870 census was possibly a mistake by the census-taker or a lie. But why? And the birthdates are all over the place. I looked carefully at each record. In each I found Andrew Fitzgerald and his wife Catherine, an address in Charlestown (in later years Charles River Avenue) and his profession stated as laborer or teamster. My guess is that he worked on the docks as a driver.

If Andrew was born in 1814 or 1815, he would have been 82 when he died. If he were born in 1834 he would be in his 60's. Certainly whoever certified his death would have known the difference. I can understand why an immigrant would make himself older...but almost 20 years older?

So I'm no closer to an answer, but at least I have a timeline for his life. I'm hoping someone out there may have an suggestion. It's all very mysterious....
at November 17, 2013