A New Resource for Irish Genealogy

This picture of a church sets the scene for a fabulous new resource I found this month. Lisa Louise Cooke, of Genealogy Gems, published a Facebook link to new records that went online at the
Irish National Library. You can get to them here.

I was very lucky. I knew enough information to make a smart guess at exactly where to look and within half an hour I had baptismal records for three people in my dad's family: his mother Catherine Marie Cooke, his aunt Mary Ann Cooke (called Mamie by the family) and his uncle John J Cooke (called Jack). My very fanciful (she once announced that we were really Italian and related to the Gherhardinis.  Eeek!) Cousin Katherine had recalled that Jack said the family was from "Curry village". I popped "Curry" into the parish terms and there were the records. I was lucky.

The geopolitical divisions of Ireland are a bit hard to get used to. For example, technically this family lived in the following: Province of Connaught, County Sligo, Barrony of Leyny, Civil Parish: Achonry, Poor Law Union of Tobercurry, Townland of Cloonigan. Where's Curry in all this mess? Well that's the Roman Catholic parish as well as a totally separate townland. There were also Church of Ireland parishes. What a mess!

The dates in the records are all over the place. The "official records" say, for example, that Mary Ann
Cooke was born on the 17 December 1874. Here is her baptism record: 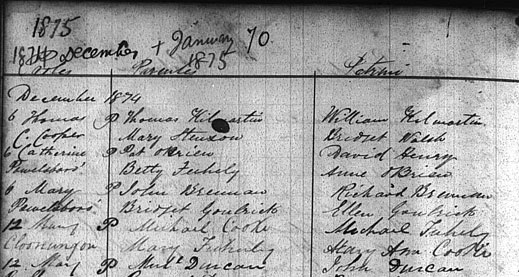 Cloonigan is waaaaay out in the country. Even today on Google street view you get a few houses, a narrow two-lane road and lots of brushy open land. So I'm guessing she was born closer to the 12th and they didn't make the official record until closer to the 17th. The interesting thing in all these records are the "patrons" or  godparents. I don't know yet who these people are, but it is something more to go on. In this case we have Mary Ann Cooke and Michael Feehely. One person from dad's family and one from mom's I'm guessing. 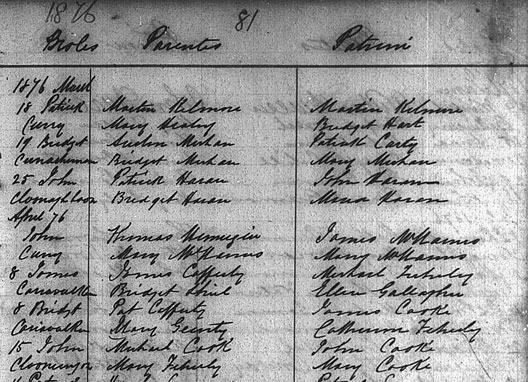 Again this is almost a month earlier. His godparents are John Cooke and Mary Cooke. I know that Michael's father was named John, but the Griffith's Valuation shows a John and a John Jr., so maybe this is Michael's brother.

And lastly we have my grandmother, Catherine Marie Cooke, born 4 March 1878. 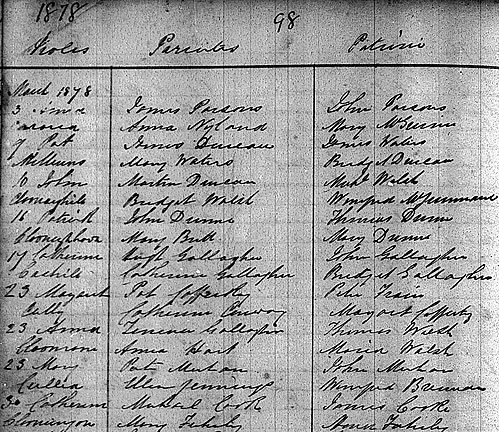 This time the baptism is a little bit later. The godparents in this case are James Cooke and Ann Feehily. Again I'm thinking uncles, aunts or cousins. Cloonigan was so tiny it didn't even have a town center, so the nearest church would probably have been the Church of the Immaculate Conception in Curry. My best guess is that my photo is the scene of the baptisms.

No wonder none of these three relatives were really certain of their actual birthdate! At any rate, this is a wonderful new resource for those trying to unravel an Irish family.  The serendipity of having a record pop up so quickly has encouraged me a bit. Persistence really does pay off.
at July 31, 2015